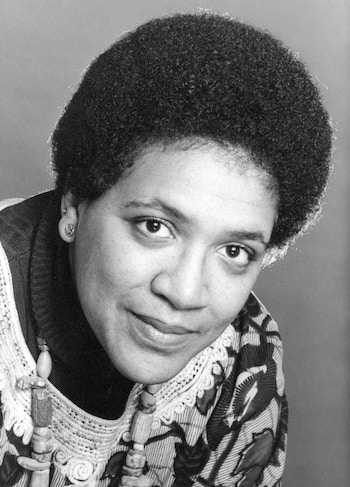 Poet, novelist, essayist, educator, and activist Audre Lorde was born in Harlem, New York City, in 1934. She was the youngest of three daughters of Black immigrant parents: her mother originated from Grenada and her father from Barbados in the West Indies. Lorde’s troubled, distant relationship with her parents made expressing herself difficult; she learned to talk at age four, at the same time as she was learning to read and write. She penned her first poem at eight and began to write poetry consistently at twelve or thirteen. Later, she would say of her childhood self, “I literally communicated through poetry.” Lorde attended Catholic parochial schools before transferring to Hunter High School, which she graduated from in 1951. While a student, she submitted a poem, “Spring,” to the school magazine, where it was rejected for its subject matter. However, it was accepted by Seventeen, marking her first publication.

Lorde earned a BA from Hunter College, graduating in 1959. Around this time, she began to find community in Greenwich Village’s thriving LGBTQ+ culture. She received her MLS from Columbia University and spent much of the 1960s working in New York public school libraries. Lorde married Edwin Rollins, a white, gay, man, in 1962; the couple had two children before divorcing in 1970. In 1968, Lorde was named writer-in-residence at Tougaloo College in Mississippi. She met long-term partner Frances Clayton during this time, as well as publishing her first poetry collection, The First Cities (1968). Over the next few years, she would also publish Cables to Rage (1970); From a Land Where Other People Live (1972), nominated for a National Book Award; and New York Head Shop and Museum (1974).

After her positive experience at Tougaloo, Lorde transitioned to teaching. She spent a year at Lehman College before becoming a professor of English at John Jay College of Criminal Justice in 1970. In 1976, she published the collection Coal with Norton, consolidating her reputation as a major poet. The Black Unicorn followed in 1978. Her prose debut, The Cancer Journals, was published in 1980 and remains a seminal text in illness literature. Zami: A New Spelling of My Name, Lorde’s “biomythography” novel, followed in 1982, and Sister Outsider: Essays and Speeches, her landmark nonfiction collection containing the often-quoted essay “The Master's Tools Will Never Dismantle the Master's House,” in 1984. Her essay collection A Burst of Light (1988) won the National Book Award. Lorde held the role of State Poet of New York from 1991 until her death in 1992.

Lorde’s immense influence across fields including feminist theory, queer theory, critical race theory, and disability studies as well as literature is unique in modern times. Self-described in her public appearances as a “black, lesbian, mother, warrior, poet,” Lorde saw herself as an individual rather than a member of a single identity category, making her an early exemplar of contemporary intersectionality. The recipient of an NEA Fellowship and honorary doctorates from Hunter, Oberlin, and Haverford, Lorde co-founded Kitchen Table: Women of Color Press, the US’s first publisher dedicated to women of color, and was also a formative influence on the Afro-German movement. Lorde’s writing, groundbreaking for its time, remains vital and influential thirty years after her death.

Text: Three poems by Lorde at Poetry Out Loud

Photo from the Spelman Archives, courtesy of the Estate of Audre Lorde.

Bridge through my Window