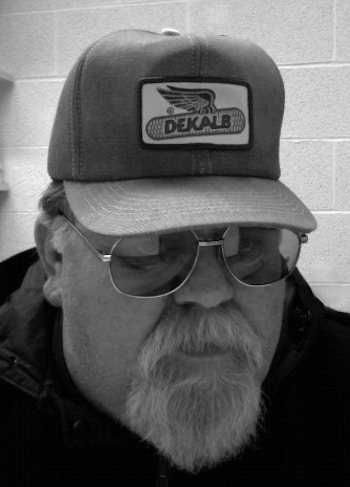 Poet and fiction writer Adrian C. Louis was born and raised in northern Nevada, the eldest of twelve siblings. An enrolled Lovelock Paiute tribe member, Louis was of mixed Indigenous and white descent. He published his first poem when he was a high school junior. He received both a BA in American literature and an MA in creative writing from Brown University.

Louis began his career as a journalist. He edited multiple Native newspapers, including Lakota Times, Talking Leaf, and Indian Country Today, and co-founded the Native American Journalists Association. In 1984, he entered the education sphere with a role teaching English and writing at South Dakota’s Oglala Lakota College, which he held until 1997. He then served as a professor of English at Minnesota State University from 1999 until his retirement in 2014.

Direct and visceral, facing personal trauma and the struggles of life with unswerving honesty, Louis’s poetry has received high praise from leading lights throughout the poetry community. His admirers include Martín Espada, Paisley Rekdal, Hayden Carruth, and Joy Harjo, while Sherman Alexie has cited his work as the initial inspiration for his own writing career. He was honored with fellowships from the Bush Foundation, the National Endowment for the Arts, the Lila Wallace-Reader’s Digest Foundation, the South Dakota Arts Council, and the Nebraska Arts Council, and he was elected to the Nevada Writers’ Hall of Fame in 1999. Louis’ poetry was published in numerous anthologies and journals. He died in Marshall, Minnesota, in 2018.

Text: Sherman Alexie on the line by Louis that inspired him to become a writer