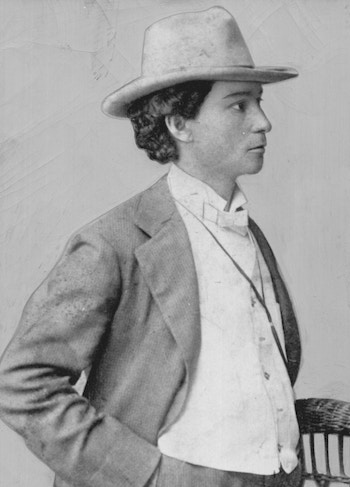 Writer and politician Alexander Posey was the oldest of 12 children born to a Scots-Irish and Muscogee Creek family in Indian Territory (now Oklahoma). His formal education began at 14, and he attended Bacone Indian University three years later. Posey’s poems in school journals received early attention and wide publication. He was elected to a seat in the Creek National Council after graduating and remained a major figure in Muscogee Creek Nation doings throughout his life. In 1896, he married schoolteacher Minnie Harris, with whom he had two children.

Posey was the editor of Eufaula Indian Journal, the first daily newspaper to be published by a Native American. He is also remembered for his character Fus Fixico, under whose name he wrote satirical letters critiquing the United States’ policies toward tribal lands and related political issues. In 1906, Posey served as secretary for the Sequoyah Constitutional Convention, which drafted a constitution for a proposed majority Native American state—likely largely written by Posey himself. He died tragically of drowning at age 34.

On Viewing the Skull and Bones of a Wolf