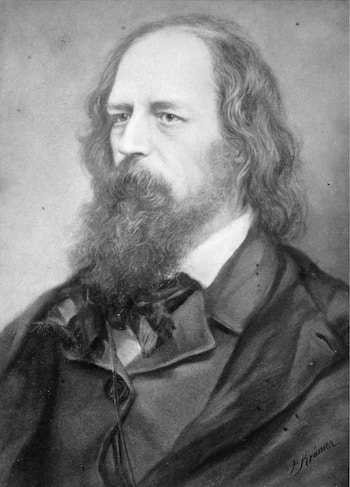 Victorian poet Alfred Tennyson, 1st Baron Tennyson was born at Somersby Rectory in Lincolnshire, the fourth son among the twelve children of rector George Clayton Tennyson and his wife Elizabeth Fytche. Many of the young Tennysons showed early literary talent, but Alfred soon outshone the rest of his family, writing a 6,000-line epic poem at age twelve and publishing a joint collection with two of his older brothers five years later. After grammar school, he attended Trinity College, Cambridge, likely motivated by the prospect of escape from his famously unstable, difficult father. At Cambridge, he won the Chancellor’s Gold Medal for his poem “Timbuktu,” bringing him to the attention of the poet Arthur Hallam, who became a dear friend. However, when the elder Tennyson died, his own wealthy father opted to stop funding the education of his grandsons, and Alfred was forced to leave school and live on a scant allowance.

Even in the face of penury, Tennyson was determined to make a career as a poet. However, his first two solo collections, Poems, Chiefly Lyrical (1830) and Poems (1832), were panned so harshly by critics that he stopped publishing for nearly a decade, although he continued to write. It was not until the release of his two-volume Poems in 1842 that the tide turned: its publication was received with enthusiasm by both press and public. This work and his subsequent In Memoriam of 1850 made his reputation. Tennyson married his childhood friend Emily Sellwood immediately after the latter collection’s publication, returning home post-honeymoon to rave reviews and, in the following year, the title of poet laureate. Finally financially secure, Tennyson had two children with his wife and built a public career as a poet, winning a baronetcy from Queen Victoria in 1884. He died in 1892 and was buried in Westminster Abbey.

The Lady of Shalott