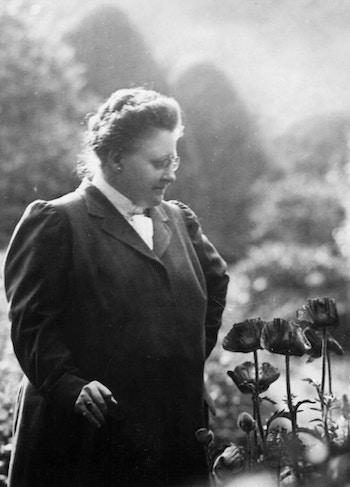 Poet, performer, critic, and lecturer Amy Lowell was born in Brookline, Massachusetts, to the prestigious Lowell family of Boston. Lowell attended private schools as a girl, but when she was kept from attending college by her old-fashioned parents, she determined to educate herself through extensive reading, book collecting, and travel. She threw herself into writing poetry in her late twenties, with a first collection, A Dome of Many-Colored Glass, published in 1912. Around this time, she began a relationship with actress Ada Dwyer Russell, which would last until Lowell’s death and inspire much of her sensual, romantic lesbian love poetry.

Lowell wrote in a free verse style she deemed “unrhymed cadence,” making her one of non-metrical verse’s first champions, and attached herself to the Imagist movement, where she soon alienated original proponent and gatekeeper Ezra Pound by expanding the group to include American poets. She was also interested in East Asian poetry, and she both wrote original English-language haikus and collaborated on translations of Chinese and Japanese poets. Lowell took advantage of her social position to advocate for younger writers, forwarding the careers of poets such as Carl Sandburg, and wrote well-received critical works on poetry. She died of a stroke in 1925; her collection What’s O’Clock, posthumously published by Russell, won the 1926 Pulitzer Prize in Poetry.

Madonna of the Evening Flowers