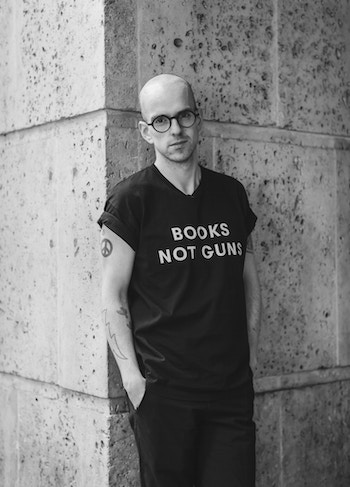 Andrew McMillan was born in 1988 to Ian and Catherine McMillan, the youngest of three siblings raised in a small town outside Barnsley in South Yorkshire, UK. His father was a poet and the host of literary BBC radio show The Verb. Surrounded by poetry as a child, the young McMillan wrote his own horror stories and poems. When he was 16, McMillan came out to his parents. His father responded by giving his son a book of Thom Gunn’s collected poetry. Gunn’s lyric poems of life as a gay man in San Francisco—covering love, lust, and yearning as well as the ravages of AIDS and drugs—spoke to McMillan deeply. The discovery of Gunn’s personally resonant work and of other 20th-century poets like Philip Larkin pushed McMillan back into the direction of poetry and the degree he received in English literature and creative writing from Lancaster University.

McMillan launched his career as a poet while still at university. In 2009, he co-founded the poetry magazine Cake. His first published works were pamphlets from Red Squirrel Press: 2009’s every salt advance, followed by the moon is a supporting player in 2011 and protest of the physical in 2013. This last publication was made up of a single poem, which became the centerpiece of his debut full-length, physical. McMillan’s pamphlets, as well as his poetry’s placement in the anthology The Salt Book of Younger Poets, began to bring him wider attention: in 2012, he was named a “new voice” by both the Latitude Festival and the Aldeburgh Poetry Festival. McMillan completed his MA in Modernism at University College London in 2013.

Throughout his higher education, McMillan was hard at work on the manuscript for physical, which he began writing in 2008 after the end of his first long-term relationship. When completed, the book garnered popular and critical praise alike: it was the first poetry collection to win the Guardian First Book Award in the prize’s 17 years. physical also won the Fenton Aldeburgh First Collection Prize, a Somerset Maugham Award, a Northern Writers’ Award, and an Eric Gregory Award; it was shortlisted for numerous prizes, including the Dylan Thomas Prize, the Costa Poetry Prize, and the Forward Prize for Best First Collection. Published in 2015 by Jonathan Cape, physical is an intimate account of gay male experience and anxiety, in which desire, the body, and the many facets of modern masculinity are tenderly and straightforwardly explored. The poems in physical express a desire for bodily and metaphysical community, which McMillan views as a salve to the spiritual homelessness experienced by many gay people, forced to feel like outsiders in small hometowns. This desire for belonging manifests itself in “A Gift,” a dedication “for the ones I never touched […] the ones / I never called for the ones I called / who didn’t answer.” The poem links the narrators’ real and potential encounters with other gay men to the shared experiences of the gay community as a whole, bridging the distance between all of them with the “gift” of the titular poem itself.

McMillan’s second collection, playtime, was published in 2018 by Jonathan Cape, winning the inaugural Polari Prize and receiving citations as a Poetry Book of the Month in both The Observer and The Telegraph and a Poetry Book of the Year in The Sunday Times. In 2019, McMillan was one of the contenders for the prestigious Oxford Professor of Poetry position, and his Oscar Wilde–inspired play Dorian was staged at the Lowry in Salford. McMillan now lives in Manchester, UK, with his partner, Ben, and teaches poetry as a senior lecturer at Manchester Metropolitan University.

Audio: McMillan shares words on his poetry with radio show The Writing Life.

Text: McMillan discusses the poets who influenced his work.

from Love Minus Love