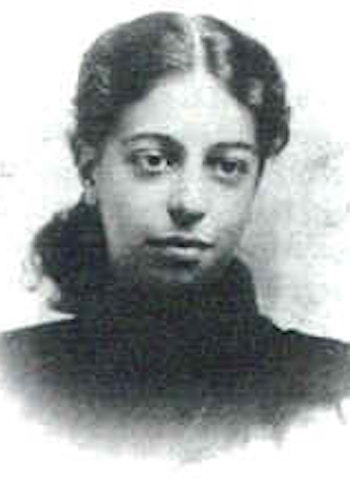 Writer and Harlem Renaissance figure Angelina Weld Grimké was born in Boston, Massachusetts, to a prominent mixed-race family. Her father, Archibald Grimké, was the vice-president of the NAACP, and her great-aunts, one of whom was her namesake, were abolitionists and suffragists. Archibald Grimké wed white Midwesterner Sarah Stanley, who left the marriage soon after their daughter’s birth and took her along, sending her back to her father at age seven. The young Grimké attended high school in Boston and spent the next 24 years teaching in Washington, D.C.

Grimké’s poems, essays, and stories were published in several of the major Black anthologies of the Harlem Renaissance, including The New Negro and Caroling Dusk, as well as in periodicals such as The Crisis and Opportunity. Her play Rachel, written for the NAACP as a critique of racial violence, was one of the first by a Black woman to be publicly performed. Grimké never married, and evidence in her poetry and correspondence suggests that she was lesbian or bisexual. After her father’s death in 1930, Grimké moved to New York City and ceased publishing her writing. She died in 1958.

The Want of You