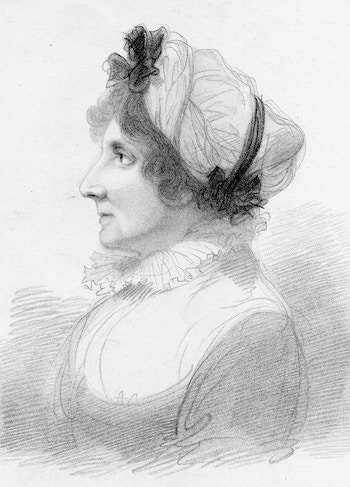 Anna Lætitia Barbauld, née Aikin, was born in Kibworth Harcourt, Leicestershire, the daughter of a dissenting Presbyterian minister and teacher. She could already read at two years old, and she later convinced her father to teach her Latin, Greek, and other subjects women rarely studied at the time. She began writing poetry in her twenties, covering topics including politics, female friendship, and the natural world. Her debut volume, Poems, was a huge success and achieved four editions in just one year. It was a source of inspiration to Romanticism’s two early popularizers, Samuel Taylor Coleridge and William Wordsworth, though Coleridge’s critiques of Barbauld in his more conservative later decades would contribute to her erasure from the Romantic canon.

The poet married Rochemont Barbauld in 1774, with whom she opened Palgrave Academy, a school for boys. The childless couple adopted Barbauld’s nephew Charles, one of the sons of her brother and literary collaborator, John Aikin. Barbauld wrote primers and lesson books with young Charles and her Palgrave pupils in mind that were reprinted around the world, making her a household name in education. After leaving the school in 1785, Barbauld wrote essays on social topics such as slavery abolition and revolutionary politics, drawing her comparisons to Samuel Johnson; she also penned hundreds of literary reviews and edited several anthologies. Her impressive literary reputation was upended with her 1812 satire of England, Eighteen Hundred and Eleven, which brought harsh criticism and was the last work she ever published. Pushed out of the story of English writing by Coleridge and others’ aspersions, as well as by her reduction to a moralizing writer of children’s primers, Barbauld is only now being reconstituted as the prominent literary figure she was while she lived.

Image from British Museum is licensed under CC BY-NC-SA 4.0.

The Rights of Women