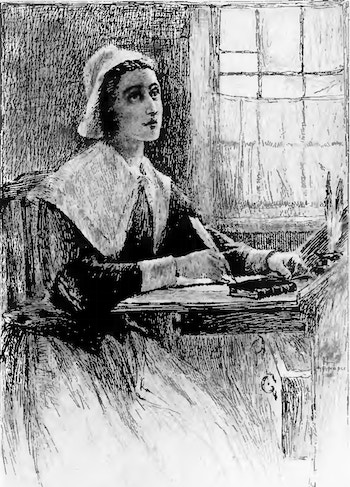 Anne Bradstreet, born Anne Dudley in Northamptonshire, England, was one of the first American poets to write in English, as well as the first American woman whose writing was internationally recognized: a remarkable feat considering that she wrote while raising eight children in the uncertain conditions of early Puritan New England. In lieu of formal schooling, Bradstreet was taught by her well-read father, steward to the Earl of Lincoln, and by her own explorations of the classics and British literary greats in the Earl’s extensive library. She immigrated to Salem, Massachusetts, with her parents and her husband, Simon Bradstreet, in 1630, where she soon began writing poetry. In 1650, the first edition of her book The Tenth Muse Lately Sprung Up in America was published in England by her brother-in-law, supposedly without her knowledge.

Much of her early writing drew on conventional classical, historical, and religious themes, but as she gained confidence as a poet, she began to investigate more personal topics: she wrote elegies for family members, love poems for her adored husband, and other works that—daringly for the time—balanced the Puritan focus on the afterlife with worldly concerns like her deep enjoyment of the pleasures of everyday life. Her poetry was largely forgotten until the mid–20th century, but she is now considered one of early America’s most significant poets.

The Author to Her Book

The Flesh and the Spirit