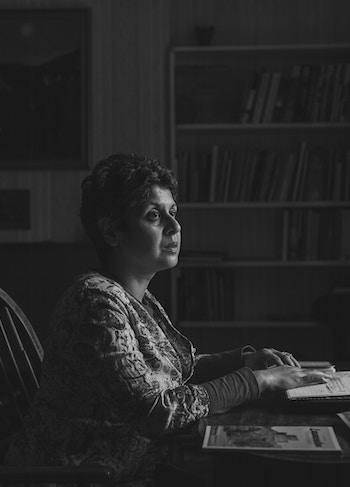 Trinidadian-Scottish poet and prose writer Anthony Vahni Capildeo was born in Port of Spain, Trinidad. They are a member of the prominent Indo-Trinidadian and Tobagonian Capildeo family of writers, politicians, and intellectuals, which includes Capildeo’s cousin V. S. Naipaul. Their father was the poet Devendranath Capildeo, and their mother Leila Bissoondath Capildeo, a student of French and philosophy, shared poems, folktales, songs, and a passion for learning with them in their early years. At age two, the young poet first encountered Trinidad’s rich performance culture, whose traditional masquerades became a lifelong interest.

Capildeo attended Dunross Preparatory School and St. Joseph’s Convent before moving to England in 1991 to attend Christ Church, Oxford. They read English, receiving an Overseas Student Research Award to complete a master of studies in medieval studies, then a Rhodes Scholarship for their PhD in Old Norse and translation theory. During their subsequent research fellowship at Girton College, Cambridge University, they intermitted to spend time in Jamaica and Trinidad. This experience helped to generate their first poetry book, No Traveller Returns (Salt, 2003), which displays the interest in geography, plurilingualism, memory, and cross-genre work that would characterize much of their later writing.

Capildeo has published eight books and eight pamphlets, including Dark and Unaccustomed Words (2012), which was longlisted for the OCM Bocas Prize for Caribbean Literature; Measures of Expatriation (2016), a winner of the 2016 Forward Prize and Poetry Book Society Choice that was short-listed for the T.S. Eliot Prize; Venus as a Bear (2018), which was shortlisted for the Forward Prize for Best Collection and named a Poetry Book Society Summer Choice; and Skin Can Hold (2019), longlisted for the BOCAS Prize for Caribbean Literature. Their most recent book, 2021’s Like a Tree, Walking (Carcanet), was named a Poetry Book Society Winter Choice and longlisted for the Jhalak Prize. Each of their published poetic works investigates a new voice and poetic approach. They also write non-fiction on a wide range of topics, with pieces appearing in Granta, The White Review, Poetry, and many other publications. They serve as contributing editor at PN Review and contributing advisor for Blackbox Manifold.

Capildeo’s many honors include the Cholmondeley Award, a UNESCO Poetry Fellowship, and election as a Fellow of the Royal Society of Literature. They have been the recipient of the Judith E. Wilson Visiting Fellowship in Poetry at the University of Cambridge, the Harper-Wood Studentship at St John's College, Cambridge, the Douglas Caster Cultural Fellowship in Poetry at the University of Leeds, and the Seamus Heaney Centre Fellowship in Poetry at Queen's University Belfast. Capildeo has worked as a contributing editor for the Caribbean Review of Books, as an editorial assistant and a researcher for the Oxford English Dictionary—inspiring their collections Dark and Unaccustomed Words and Utter—and at both the Commonwealth Foundation and Oxfam Head Office. They have also volunteered with the Oxford Sexual Abuse and Rape Crisis Centre. A lecturer at multiple top universities across the UK, they are currently Writer in Residence and Professor at the University of York; a Visiting Scholar at Pembroke College, Cambridge; and an Honorary Student of Christ Church, Oxford. Capildeo has lived in the United Kingdom since 1991, returning often to Trinidad.

Audio: Listen to Capildeo reading their poems at the Poetry Archive