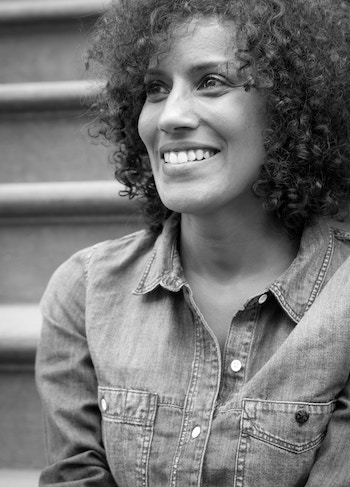 Poet, fiction writer, essayist, and educator Aracelis Girmay was born and raised in Santa Ana, a city in Southern California’s Orange County. The daughter of an Eritrean-American father and a Puerto Rican mother from Chicago, she encountered the multiplicity of language at a young age, and would return in her writing to its potential for play and exploration. Girmay grew up in a family that encouraged creativity; she wrote early poems in seventh grade on a typewriter gifted to her by her aunt. She attended Connecticut College, receiving her BA in 1999, before earning a Master of Fine Arts from New York University. Her early-career mentors include Nikky Finney and Martín Espada.

Girmay’s first publication was the collage-based picture book changing, changing (George Braziller, 2005), which she illustrated. Her debut poetry collection, Teeth (Curbstone Press, 2007), won the Great Lakes Colleges Association New Writers Award. Kingdom Animalia (BOA Editions, 2011) won the Isabella Gardner Poetry Award and was named a finalist for the National Book Critics Circle Award for Poetry and the Hurston/Wright Legacy Award. The Black Maria (BOA, 2016), her most recent collection, was selected as a “Top Poetry Pick” by Publishers Weekly, O Magazine, and Library Journal, while The Boston Globe named it one of the best books of 2016.

Themes of migration, place, loss, and attachment thread themselves through Girmay’s writing. According to Camille Dungy at The Rumpus, “Girmay’s poems, sometimes ecstatic, and always incantatory, take as their project the disciplined practice of building connections.”

The 2015 winner of a Whiting Award for poetry, Girmay has been awarded fellowships from the National Endowment for the Arts, Civitella Ranieri, Cave Canem, the Jerome Foundation, the Community-Word Project, and the Watson Foundation. Her poetry and essays have appeared in Granta, Black Renaissance Noire, PEN America, The Spoon River Poetry Review, and Prairie Schooner, among other publications. She is on the editorial board of the African Poetry Book Fund and has served as an Acentos board member.

Girmay has taught poetry at Drew University’s low-residency MFA program and at Queens College’s MFA program. She has also taught many community writing workshops with young people. Girmay is the 2021–2023 Editor-at-Large for BOA Editions' Blessing the Boats Selections series of poetry collections by women of color. An Assistant Professor of Poetry at Hampshire College, she lives in New York City.

Video: Girmay and Ada Limón read and speak at the Lannan Center

from The Black Maria