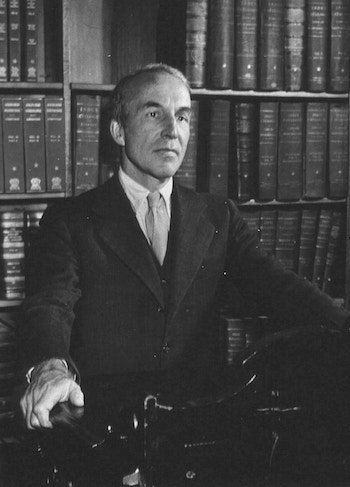 Poet, lawyer, and librarian Archibald MacLeish was born in Glencoe, Illinois. He studied English at Yale University and attended Harvard Law School, receiving his J.D. after some years serving in World War I. MacLeish practiced law briefly, until he and his wife, Ada Hitchcock, moved to Paris in 1923, where they became part of the literary expatriate milieu of Gertrude Stein, Ernest Hemingway, and Zelda and F. Scott Fitzgerald. His years in Paris and the decade after his return to the United States in 1928 were his most prolific as a poet and playwright: during this interval, he published 17 books of poetry and verse plays, including the collection Conquistador (1932), the first of his three three Pulitzer Prize–winning works, which would eventually include his Collected Poems 1917–1952 and his verse drama J.B.

In the late 1930s, MacLeish shifted his focus to statesmanship: he was named Librarian of Congress in 1939, a position he notably used to improve the administration of the institution and advocate for its programs. He also held roles with the Office of Strategic Services (later the CIA) and the War Department before reestablishing himself in academia. A Modernist contemporary of Ezra Pound and T. S. Eliot, MacLeish is remarkable for his accomplishments both within and without the sphere of poetry, and for his dedicated advocacy for culture and the arts.

Audio: Listen to MacLeish's verse play "The Fall of the City," aired in 1937 on Columbia Workshop

Audio: MacLeish poems set to music at Song of America

Text: Read three poems by MacLeish at Poetry Out Loud

The Old Man to the Lizard

The Rape of the Swan

The Snowflake Which Is Now and Hence Forever

They Come No More, Those Words, Those Finches

What Any Lover Learns