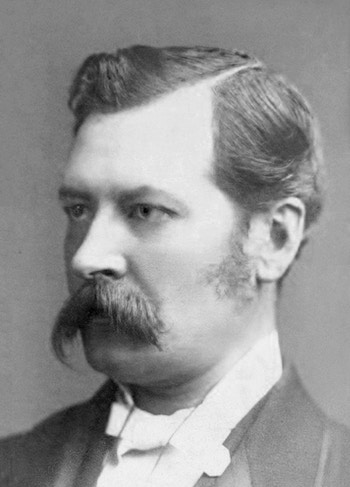 Born in London, Arthur William Edgar O'Shaughnessy came from an Irish background. He found employment as a transcriber in the British Museum’s library at the age of 17. O’Shaughnessy soon became a herpetologist in the Zoology Department of the museum, working with reptile and amphibian specimens. Over his zoological career, he identified six new species of reptiles.

From 1870 to 1875, O’Shaughnessy published four poetry collections. He drew inspiration from the Pre-Raphaelites—some of whom he counted as friends—and contemporary French poetry, contributing to the shift to English Decadent writing. He married Eleanor Marston in 1873, with whom he co-wrote the children’s story collection Toy-land (1875). The couple’s two children died in infancy, and Eleanor died in 1879. O’Shaughnessy passed away two years later. His herpetological work was posthumously honored via the names of four newly discovered lizard species, all dubbed oshaughnessyi.