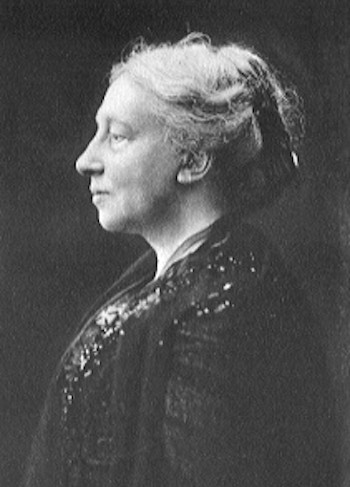 Augusta, Lady Gregory, born Isabella Augusta Persse, was the ninth of thirteen children in the Persse family of County Galway. She grew up at Roxborough, her Anglo-Irish family’s estate, and, like many women of the time, was educated at home. Her relations with her parents were distant, particularly with her evangelical Protestant mother, who preferred her male children. Young Lady Gregory gravitated to the family nurse, Mary Sheridan, a Catholic and native Irish speaker who shared traditional local stories with her charge.

In her 28th year, she wed Sir William Henry Gregory, a much older widower who lived at Coole Park. Sir William was a great enthusiast of the arts and gave the creatively-minded younger woman her first chance to explore this sphere. She spent time in his wide-ranging library and art collection and hosted salons with her husband in their London home, welcoming prominent literary guests such as Robert Browning, Lord Tennyson, and Henry James. The pair also traveled widely, visiting popular Continental sites like Italy and Spain as well as places farther afield, including Egypt and Ceylon, the latter of which Sir Gregory had been Governor of before his retirement. Egypt was the locus of Lady Gregory’s first literary efforts: her pamphlet “Arabi and His Household,” written in defense of nationalist Egyptian army officer Ahmed Arabi Pasha, is believed to have saved him from execution by Egypt’s British rulers. Additionally, her first published poems, A Woman’s Sonnets, were born of an affair in Egypt with poet Wilfrid Scawen Blunt. Blunt published them as part of a collection of his own; both the tryst and Lady Gregory’s authorship remained undiscovered until the 1970s. The Gregorys had one child, Robert, born in 1881, who would die in World War I and be eulogized by W. B. Yeats in several poems, at Lady Gregory’s request.

After Sir William’s death in 1892, Lady Gregory was released from her considerable social and wifely obligations. She used this newfound free time to embark on her own creative efforts. Finding common cause with the Irish Nationalist movement, she began learning Irish and spending the majority of her time at Coole Park, rather than in London. She also traveled to the Aran Islands and started a project of collecting Irish folklore that would last most of her life. When she met W. B. Yeats in 1896, the two quickly became close, and he was soon a frequent guest at Coole. In 1899, Lady Gregory, Yeats, and Edward Martyn founded the Irish Literary Theatre, which closed shortly afterwards due to a funding shortfall. By 1904, the group had reconvened with fresh blood, pulling in John Millington Synge, among others. They formed the Irish National Theatre, which would make its permanent home at the Abbey Theatre. At this point, Lady Gregory was actively writing plays, one of which, Spreading the News, was performed for the theatre’s opening night. Her plays were among the theatre’s most popular in its early days, and she played a major role in the administration of the Abbey until 1928.

Lady Gregory also assembled Irish folklore and myths and translated them into English. Her collections in this vein brought international attention to the tales of Cú Chulainn and others, refuting Anglocentric claims that the Irish oral tradition lacked great heroes of its own. Many of these books were rendered in the “Kiltartanese” she created to evoke the spoken Hiberno-English of County Galway’s parish Kiltartan.

Lady Gregory died of breast cancer in 1932. Between her work in promoting Irish culture and legend, her pivotal role in sustaining and shaping the voice of Irish theatre, her patronship of artists like Yeats, and her own 19 plays and other writings, Lady Gregory is considered a linchpin of the Irish Literary Revival and one of Ireland’s great literary women.

Text: Lady Gregory's translation of "Donal Og" at The Guardian

Alas! A Woman May Not Love!

The Heart of the Wood