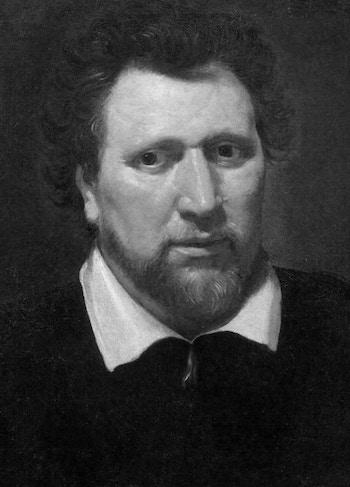 Poet and playwright Benjamin Jonson was born in London in 1572, a month after the death of his clergyman father. His mother remarried a bricklayer when he was a toddler. Jonson attended Westminster School, where he received a classical education; after leaving school, he reluctantly worked for a time as an apprentice to his stepfather before volunteering for the English military in Flanders. Upon returning to England, he began a career as an actor and playwright, soon becoming part of the Admiral’s Men troupe. He married Ann Lewis in 1594, with whom he had at least three children.

Jonson’s plays, particularly his comedies, were received with increasing acclaim over the course of his career by the public and his patrons. However, he faced numerous controversies along the way for his boundary-pushing writing and behavior. His play The Isle of Dogs won him a jail sentence, while Sejanus also garnered him public investigation; he also served two further short stints in jail for manslaughter after winning a duel and for failure to pay an actor. Regardless, Jonson’s great talent allowed him to weather these scandals and find royal favor. He wrote plays and masques for James I until the end of that monarch’s reign and received a pension of £100 annually for the last years of his life, causing some to consider him the first English Poet Laureate. A figure of the English Renaissance next to Shakespeare in stature, Jonson is celebrated for his sharply satirical wit, his insightful social observations, and his influence on many subsequent generations of poets and playwrights.

A Fit of Rhyme Against Rhyme

My Picture Left in Scotland

Simplex Munditiis (Still to be neat)