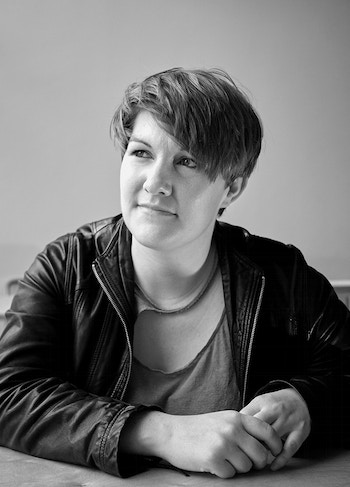 Poet, playwright, and educator Caroline Bird was born and raised in Leeds, England. The daughter of Jude Kelly, an acclaimed theater director and producer, she wrote her first poem at eight years old. By 13, she had won the Foyle Young Poets of the Year Award. The Arvon Foundation residential poetry course that came with the award was a life-changing event for Bird, bringing her into community with other young people who shared her passion for writing. She attended the Steiner School in York and the Lady Eleanor Holles School, then moved to London in 2001. Bird went on to study English literature at Oxford University, where she was president of the Oxford Poetry Society. As she told Natalya Anderson, “By the time I got to university I felt poetry was my secret world, but it was where I was understood, and I understood it as well.”

Bird released her first collection of poems, Looking Through Letterboxes (Carcanet, 2002), when she was just 15. Its publication was entirely serendipitous: Bird submitted poems to the PN Review, not knowing of its publisher affiliation, and sent along a manuscript’s worth of poems when its editors asked for more of her work. She has published five collections since, all with Carcanet: Trouble Came to the Turnip (2006); Watering Can (2009), a Poetry Book Society Recommendation; The Hat-Stand Union (2013); In These Days of Prohibition (2017), which was shortlisted for both the T.S. Eliot Prize and the Ted Hughes Award; and The Air Year (2020). The Air Year received much critical acclaim, winning the Forward Prize for Best Collection, making the shortlists for the Costa Poetry Award and the Polari Book Prize, and being named book of the month by The Telegraph and book of the year by The Guardian. Bird’s poems have also been published in anthologies and journals including Poetry Magazine, PN Review, Poetry Review, and The North, as well as being broadcast on BBC Radio 4 and BBC Radio 3.

As a playwright, Bird was the youngest-ever member of the Royal Court Young Writers Programme and was shortlisted for Most Promising New Playwright at the Off-West-End Awards. Her plays include the musical The Trial of Dennis the Menace, inspired by comic The Beano, which debuted at the Southbank Centre’s Purcell Room (2012); a reimagining of The Trojan Women for the Gate Theatre (2012); Chamber Piece, a finalist for the Susan Smith Blackburn Prize, for the Lyric Theater Hammersmith’s Secret Theatre season (2013); The Wonderful Wizard of Oz for Northern Stage (2015); and The Iphigenia Quartet for the Gate Theatre (2016). Red Ellen, her play about politician and activist Ellen Wilkinson, runs in theaters across Northern England during spring 2022.

Bird’s many additional honors and awards include an Eric Gregory Award, two Foyle Young Poet of the Year awards, two Simon Elvin Young Poet of the Year Awards from the Poetry Society, and placements in the Poetry London Competition and in the Peterloo Poetry Competition three years running. She has been shortlisted for the Shell Woman of the Future Awards, the Geoffrey Dearmer Award, and twice for the Dylan Thomas Prize. She was named “Young Champion” at the 2010 Youth Olympic Games in Singapore and was an official poet at the London Olympics in 2012. Her poem “The Fun Palace” on theater director Joan Littlewood is on permanent display at the Queen Elizabeth Olympic Park. Bird currently lives in London, where she teaches at the Arvon Foundation and serves as a writer-in-residence for non-profit First Story.

Video: Bird gives a poetry lesson for children at the British Library