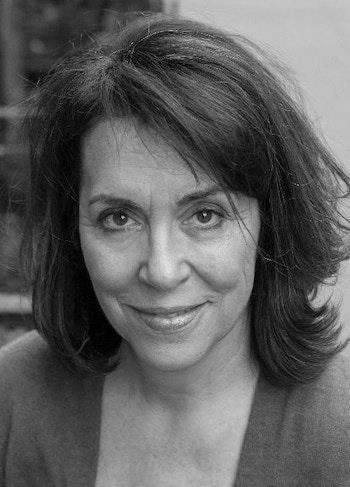 Poet and educator Catherine Barnett was born in Washington, D.C., and raised in the Bay Area. Her mother was an abstract painter. Barnett earned her BA from Princeton University and worked as a journalist, then as a fiction writer, before her teacher Ruth Danon helped direct her toward poetry. She wrote her first poem the night her son was born.

Barnett received her MFA from the Warren Wilson MFA Program for Writers, where her professor Ellen Bryant Voigt was another major influence. She wrote much of her first poetry collection, Into Perfect Spheres Such Holes Are Pierced, while in grad school. The book won the Beatrice Hawley Award and was published by Alice James Books in 2004. Her second book, The Game of Boxes (Graywolf Press, 2012), won the James Laughlin Award from the Academy of American Poets. In 2014, she and Tiphanie Yanique co-edited the anthology Another English: Anglophone Poems from Around the World (Tupelo Press, 2014), part of the Poetry Foundation’s Harriet Monroe Poetry Institute Poets in the World series.

Barnett’s most recent collection, Human Hours, was published by Graywolf in 2018. Winner of the 2018 Believer Book Award in Poetry, Human Hours was also a New York Times “Best Poetry of 2018” selection and a finalist for the T.S. Eliot Four Quartets Award. Its poems cover life-changing losses, such as Barnett’s son’s move away from home and her father’s descent into dementia. However, this pathos is tempered by Barnett’s characteristic humor and her invocation of questions, metaphors, and riddles as approaches to understanding the vagaries of human existence.

The poet’s honors include a Guggenheim Fellowship, a Whiting Writers' Award, a Glasgow Prize for Emerging Writers, and a Pushcart Prize. Her writing has been published in many journals, magazines, and periodicals, such as The American Poetry Review, Barrow Street, The Kenyon Review, New York Review of Books, The New Yorker, Pleiades, Poetry, The Virginia Quarterly Review, and The Washington Post.

Barnett teaches in the graduate and undergraduate creative writing programs at New York University, where she has been honored with an Outstanding Service Award. She also serves as Distinguished Lecturer at Hunter College and a Visiting Poet at Barnard College, as well as working as an independent editor. Barnett previously taught at Princeton University and The New School and was poet-in-residence at the Children’s Museum of Manhattan, where she taught poetry to young mothers in New York City’s shelter system. She lives in New York City.

Audio: Barnett reads works by other writers on the theme of time for 92Y’s Read By podcast

Apophasis at the All-Night Rite Aid