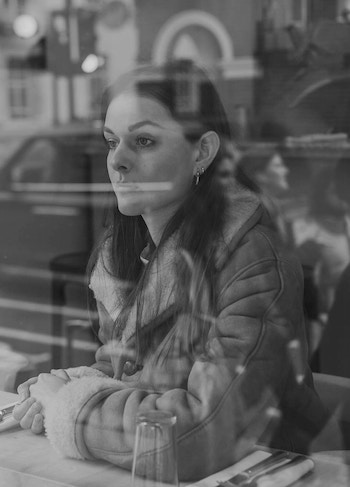 Poet, playwright, and novelist Cecilia Knapp was born in Brighton in the south of England. She lost her mother to cancer at age seven and was raised by her father, along with her two brothers. At 18, she moved to London, where she studied English literature at Goldsmiths, University of London. She attended her first spoken-word performance workshop at the Roundhouse in Camden and fell in love with the form. Knapp began to teach herself the craft of poetry through free workshops and became a fixture of London’s open-mic poetry scene. Soon, she was receiving requests to perform and teach workshops herself. At first, she had to balance work as a freelance writer with bartending, temping, and other roles, but a major commission from Halifax’s I O U Theatre gave her the courage to dedicate herself to her writing and performance career.

Knapp’s most visible public role has been as Young People’s Laureate for London 2020–2021. As Laureate, her primary focus was to bring poetry to young people who had never written it before. Via four residencies and a multifaceted campaign of performances, workshops, and projects, she greatly expanded the visibility of poetry to London’s youth. Over the course of a year, Knapp partnered with charities, nonprofits, and arts organizations to teach workshops directly to nearly a thousand participants. She also performed to over 3,500 young people, and her online campaigns reached over 120,000 people.

Knapp is the winner of the 2021 Ruth Rendell award, which honors her contribution to raising literacy levels in the UK. She has been shortlisted for the Rebecca Swift Women’s Prize and the Out-Spoken Prize for Poetry, for her poem “My Mother Quit Bread.” She was featured in British Vogue as one of the UK's young writers to watch and received a poetry commission from the magazine. In 2021, she was a guest on BBC Radio 4’s “Poetry Please.” Her poems have appeared in The White Review, Wasafiri, Popshot, Ambit, Magma, Bath, as well as anthologies and other literary magazines. She has written for the Huffington Post, The Independent, and The Stage and has been commissioned by the Tate, the BBC, and the Guardian. She also curated the 2021 anthology Everything is Going to be All Right: Poems for When You Really Need Them, published by Trapeze.

A TedX speaker and former resident artist at the Roundhouse, Knapp curated and presented the BBC Radio 4 documentary Powerlines on the poetry of the coast. Her dramatic pieces Finding Home and Losing the Night both opened to sold-out London runs at the Roundhouse prior to UK tours. Knapp has taught creative writing in a wide range of settings, including schools, prisons, youth centers, arts charities, and many prominent theaters and universities. She was resident poet at Great Ormond Street Hospital for two years and is lead tutor for the Roundhouse’s prestigious poetry collective. She also serves as an ambassador for the mental health charity CALM. Knapp’s debut novel, Little Boxes (2022), is published by the Borough Press, an imprint of HarperCollins. Her debut poetry collection, Peach Pig, will be published by Corsair in fall 2022.

Text/Audio: Read and listen to three poems by Knapp at the White Review