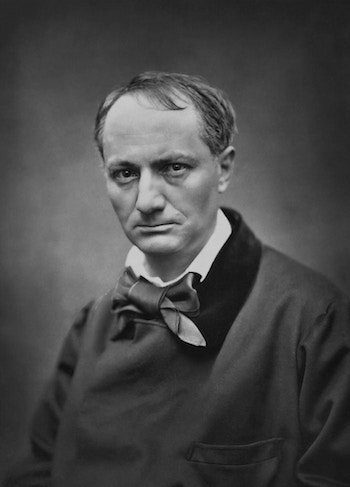 Renowned French Decadent poet and critic Charles Pierre Baudelaire was born in Paris in 1821. His father died when he was six, and his mother soon remarried; many of his biographers believe this disruption helped shape his unusual character. A middling student, Baudelaire dabbled in law before opting to pursue a literary career. He spent lavishly on clothes, drugs, sex workers, and other trappings of an opulent bohemian lifestyle, nearly running through a large inheritance before it was put in trust by his family. A seminal translator of Edgar Allan Poe, whom he considered a kindred spirit, Baudelaire also wrote influential critical works on art, music, and literature. He was an intimate of many prominent contemporaries, from Victor Hugo, Honoré de Balzac, and Gustave Flaubert to Franz Liszt and Édouard Manet. Baudelaire suffered from ill health for the last years of his life, likely from a case of syphilis contracted during his early years of debauchery. He died in 1867 at just 46 years old.

Baudelaire’s poetry was groundbreaking for its time, drawing from the Romantic tradition but rejecting nature and essential goodness as its organizing themes. Instead, he created a poetry of the modern, which incorporated urban imagery and subjects; a complex morality that dwelled on decadence, death, and sin; and symbols and sensory elements that gave his works a primal resonance. His poetic magnum opus, Les Fleurs du mal, was first published in 1857; despite public censure, it was celebrated by his fellow artists, majorly influencing a generation of French poets and serving as a starting-point for the Symbolist and Modernist schools worldwide.