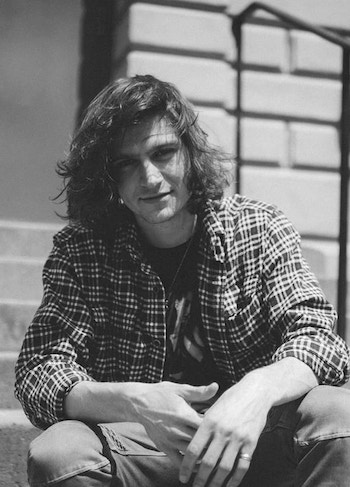 Corbin Louis is a performance poet, visual artist, and musician with deep roots in Seattle’s slam poetry and DIY music culture. His work is an ode to survival. From addiction to chronic pain, Louis staggers on. He writes poetry to advocate for the radical fight of enduring disability.

Louis embraced performance at age 13 and established his voice in 2008 at the International Youth Poetry Slam “Brave New Voices,” filmed by HBO. He went on to earn both a BA and MFA at the University of Washington, Bothell. He is the recipient of a Jack Straw Residency and has performed in venues around the country, from the Bowery Poetry Club to the Smithsonian, and all over Seattle. Louis’ publications include Best American Experimental Writing, Atticus Review, Santa Ana Review, and Panoply Zine, and his work has been screened at the Visible Poetry Project Film Festival. In 2019, he released his debut album, Let’s Share a Bullet.

Louis seeks to open up dialogues of mental illness. As he puts it, “Ink becomes war call. Reflections. Salt water and whispers. The poet lives.”

Text: Louis' poem "Happy New Year to Everyone I Love" in Rockvale Review

Video: "The Art of Going," a video poem by Louis, at the Atticus Review