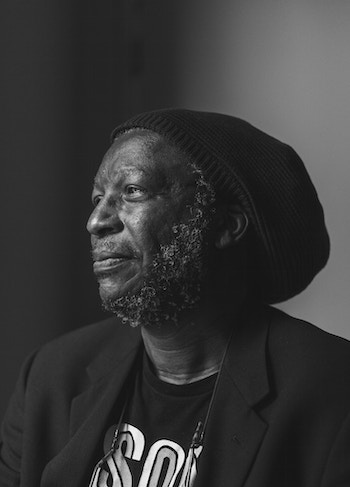 Poet, musician, arts administrator, and educator Cornelius Eady was raised in Rochester, New York. As a child, he spent a great deal of time in Rochester’s Rundell Public Library, reading poets such as William Carlos Williams, Amiri Baraka, and Pablo Neruda, and developing what would become a lifelong passion for music through listening to LPs from the library’s collection. His seventh-grade homeroom teacher fostered his early forays into writing. She published his first four poems, including one about Martin Luther King, Jr.’s assassination, in the school’s literary magazine, and encouraged Eady to transfer to the Rochester Educational Alternative school, a progressive program with a 24-hour space that supported him in spending much of his time writing. Eady attended Monroe Community College and Empire State College, majoring in English with a concentration in creative writing.

Eady published his first collection, Kartunes, in 1980. His second collection, Victims of the Latest Dance Craze (1985), was chosen as winner of the Academy of American Poets’ Lamont Poetry Award by Louise Glück, Charles Simic, and Philip Booth, bringing him widespread attention. He has since published eight other collections, including The Gathering of My Name (1991), nominated for the Pulitzer Prize; Brutal Imagination (2001), a National Book Award finalist; and Hardheaded Weather: New and Selected Poems (2008), nominated for an NAACP Image Award. Much of Eady’s writing engages with the Black American lived experience and incorporates jazz, blues, and historically Black music.

In addition to his poetry, Eady has also written musical theater productions, collaborating with jazz composer Diedre Murray. The two worked together on Running Man, a roots opera libretto based on Eady’s poems that was named a 1999 finalist for the Pulitzer Prize in Drama, and Brutal Imagination, recipient of Newsday’s Oppenheimer Award in 2002, among other projects. Eady is also a musician: he performs with literary band Rough Magic and the Cornelius Eady Trio, which whom he recently released the album Don't Get Dead: Pandemic Folk Songs. He has published two mixed-media chapbooks with accompanying CDs, Book of Hooks (Kattywompus Press, 2013) and Singing While Black (2015).

With poet Toi Derricote, Eady founded Cave Canem, a beloved nonprofit organization that supports emerging Black poets via a summer retreat, regional workshops, prizes, event, and publication opportunities. In 2016, Eady and Derricote were honored with the National Book Foundation’s Literarian Award for Outstanding Service to the American Literary Community on behalf of Cave Canem. Eady’s other honors include the Prairie Schooner Strousse Award, a Lila Wallace-Reader’s Digest Award, and grants from the National Endowment for the Arts, the Guggenheim Foundation, and the Rockefeller Foundation.

Eady has taught at many institutions, such as Notre Dame University, Sarah Lawrence College, New York University, the City College of New York, the 92nd Street Y, the College of William and Mary, and Sweet Briar College. He has been director of the Poetry Center at the State University of New York at Stony Brook and Miller Family Endowed Chair in Literature and Writing and Professor in English and Theater at The University of Missouri-Columbia. Eady is currently Interim Director of Poets House in New York City and Professor of English and John C. Hodges Chair of Excellence at the University of Tennessee, Knoxville.

Text: Read poems by Eady at Academy of American Poets