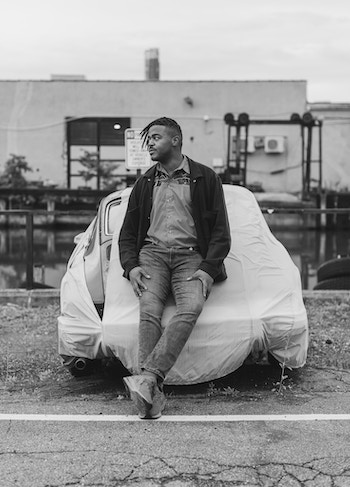 Darrel Alejandro Holnes is an Afro-Panamanian American writer, performer, and educator raisd in Panama City, Panama, and the former Panama Canal Zone. He began to consider himself a writer while in high school, after reading a commemorative poem about 9/11 at a school assembly. He studied classical and jazz saxophone at the Instituto Nacional de Música de Panamá and started his professional writing career when he moved to the U.S., earning his MFA from the University of Michigan’s Helen Zell Writing Program.

Holnes is the author of Stepmotherland (Notre Dame Press, 2022), which won the Andres Montoya Poetry Prize from Letras Latinas, and Migrant Psalms (Northwestern Press, 2021), winner of the Drinking Gourd Chapbook Poetry Prize. He co-authored Prime (Sibling Rivalry Press, 2014), chosen as an Over the Rainbow List selection by the American Library Association, and co-edited Happiness, the Delight-Tree, a poetry anthology published to commemorate the United Nations International Day of Happiness. Holnes is the recipient of a National Endowment for the Arts Fellowship in Creative Writing and the C.P. Cavafy Prize from Poetry International. A Cave Canem and CantoMundo fellow, he has earned scholarships to the Bread Loaf Writers' Conference, Fine Arts Work Center in Provincetown, Postgraduate Writers Conference at Vermont College of Fine Arts, and residencies nationwide, including one at MacDowell. His poems have been published in American Poetry Review, Poetry, Callaloo, Best American Experimental Writing, and elsewhere. He has performed his poetry at the Nuyorican Poets Cafe, Bowery Poetry Club, Lillian Vernon Creative Writers House, and venues worldwide.

In addition to his career as a poet, Holnes writes for stage and screen. His plays have received productions or development opportunities at the Kennedy Center for the Arts American College Theater Festival (KCACTF), the Brick Theater, Kitchen Theater Company, Pregones Theater/PRTT, Primary Stages, and elsewhere. His plays Starry Night and Bayano were both finalists for the Eugene O’Neill Theater Center’s National Playwrights Conference and the Princess Grace Award in Playwriting. Holnes’ other plays include Black Feminist Video Game, produced by The Civilians for 59E59 Theaters’ Plays in Place, Center Theater Group, Oregon Shakespeare Festival, and the Williams Center for the Arts at Lafayette College. His play Franklin Ave was featured in the Sol Project’s Sol Fest and as a part of the Sin Muros Festival at Stages Houston.

Holnes is an Assistant Professor of English at Medgar Evers College, a senior college of the City University of New York, and a faculty member of the Gallatin School of Individualized Study at New York University. He is also an affiliate faculty member of the CUNY Graduate Center, where he teaches ethnographic research methods. He has presented work at the Association for Writers and Writing Programs’s annual conferences and the American Folklore Society’s annual meeting, among other academic conferences. Holnes is also an advocate for the arts and the founder of the Greater Good Commission, which awards mini-grants and production opportunities to Latinx playwrights. He lives in New York City.