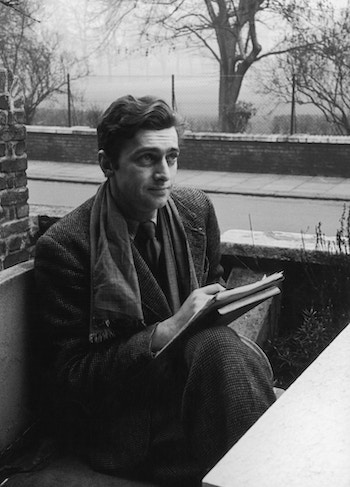 David Gascoyne was born in Harrow, London, the oldest of three sons. His father was a bank clerk whose job transfers required the family to move around Scotland and England for most of Gascoyne’s childhood. His mother had been raised by her aunt and uncle, both famous actors, and the creative figures in their milieu became major influences on the young Gascoyne. His godmother frequently brought him to see theater, and his mother’s godmother and friend took him to Bloomsbury’s famous Poetry Bookshop, where he heard T. S. Eliot read Christina Rossetti.

Gascoyne boarded at Salisbury Cathedral School, then attended London’s Regent Street Polytechnic, where his academic performance was so dismal that the headmaster encouraged his parents to withdraw him. Despite his record on paper, Gascoyne was working behind the scenes toward his own intellectual pursuits: he read widely and insatiably, taught himself French to translate Rimbaud, and visited museums during his school’s lunch hour. His first book of poetry, Roman Balcony and Other Poems, was published when he was 16, and his novel Opening Days soon followed. 1933 marked Gascoyne’s transformative first visit to Paris, which would become his home on and off for much of the next 30 years. There, he developed friendships with major figures in the surrealist scene, among them Salvador Dalí, Max Ernst, André Breton, and Paul Éluard, as well as with other notable creatives of the time, including Dylan Thomas, Laurence Durrell, Pablo Picasso, and Lucian Freud.

When Gascoyne encountered surrealist poetry, its rich French flowering was largely inaccessible to the English-speaking world. Fascinated with the movement, he determined to help bridge this gap and bring surrealism to his home country. Over just a few years, Gascoyne published A Short Survey of Surrealism; the collection Man's Life Is This Meat, which included both translations and surrealist poetry of his own; and the critical work Hölderlin's Madness. In 1936, he helped organize the London International Surrealist Exhibition. That same year, he joined the Communist Party of Great Britain and traveled to Spain to aid in anti-fascist propaganda efforts during the Spanish Civil War. However, he disagreed with the divisive tactics the Spanish communists took—and, as a bisexual, with their attitude toward homosexuality—so he soon returned to Paris.

Gascoyne’s third collection, Poems 1937-42, ­­was his first to explore metaphysical and overtly religious themes, which would become central to his later work. The book brought him expanded public recognition while also triggering his expulsion from the surrealist scene by the anti-religious Breton. Forced by World War II to return to England, Gascoyne moved back to France after the war ended, living in Paris and Provence briefly in the late 1940s and again from 1953 to 1964. During this time, he published A Vagrant and Other Poems and Night Thoughts, the latter commissioned by BBC Radio, where he presented poetry programs. He struggled with amphetamine addiction, which led to a breakdown in 1964 that brought him back to England for the last time; he would live on the Isle of Wight until his death. He met his wife, therapist Judy Lewis, in a mental hospital there, when Lewis’ reading of one of his own poems to patients serendipitously brought the two together.

Although Gascoyne wrote less during these last years, some of his earlier work was published as it was rediscovered, including material from several journals lost in the late 1930s. These works represent not just a record of Gascoyne’s personal life, but of cultural history, given the many prominent intellectuals in his circle. Gascoyne’s Collected Poems was published by Oxford University Press in 1965, followed by multiple reprints, and his Selected Poems was published by Enitharmon Editions in 1994. In 1996, he was appointed Chevalier de l'Ordre des Arts et des Lettres by the French government. He is remembered by critics today as an important proponent of surrealism—and as a poet whose work, although powerful and original, missed out on much of the recognition it deserved during his lifetime.

Audio: Three poems read by Gascoyne in 2000 for the Poetry Archive