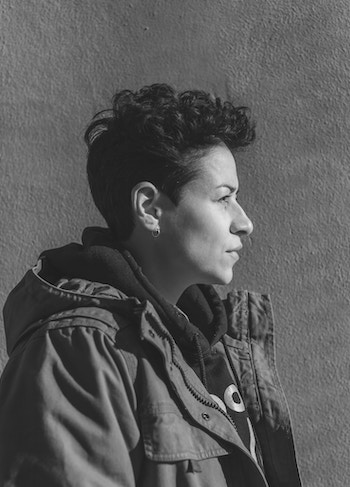 Poet, performer, and teacher Denice Frohman was born and raised in New York City. Her childhood was filled with music: rap and freestyle from the thriving New York hip-hop scene and Latin jazz from her musician father, who played with greats like Tito Puente. Frohman was taught poetry in school, but she initially found it unappealing; the poets she read spoke from identities and experiences foreign to her, so she found their work inaccessible. A passionate and talented basketball player, Frohman received an athletic scholarship to attend Dowling College, where she studied English and reencountered poetry, this time connecting with it on a deep level. After graduating, she played basketball professionally in Puerto Rico, then went on to earn a master’s degree in education from Drexel University in 2011.

Frohman began her slam poetry practice in 2010 and quickly earned a place of prominence in the spoken word community, receiving the Leeway Transformation Award in 2012. In 2013, she came to widespread attention: she won the Women of the World Poetry Slam and the Hispanic Choice Creative Artist of the Year award, and the video performance of her poem “Dear Straight People” went viral. At this time, Frohman was working as program director at the Philly Youth Poetry Movement, where she worked to provide Philadelphia teens with access to writing and performance spaces. 2014 brought her a CantoMundo Fellowship and a National Association of Latino Arts & Cultures Fund for the Arts grant.

In recent years, Frohman’s honors have included performances at the White House and on ESPN, commissions from the Metropolitan Museum of Art and Twitter’s #HereWeAre campaign, and residencies at Blue Mountain Center and the Millay Colony. Her work has been featured in anthologies such as The BreakBeat Poets: LatiNext, Nepantla: An Anthology Dedicated to Queer Poets of Color, Women of Resistance: Poems for a New Feminism, and others. She has performed and spoken at hundreds of colleges, schools, and cultural spaces.

A queer woman of Jewish and Puerto Rican background, Frohman writes poetry that excavates her ancestry and identities, engaging with questions of language, community, and social justice. Her work often seeks to subvert the status quo of oppressive power dynamics and to empower her readers, especially LGBTQ youths of color, to recognize themselves as valid, valuable individuals. Currently, she continues in her passionate interest in youth mentorship and co-organizes #PoetsforPuertoRico. She lives in Philadelphia.

Video: An animated rendition of Frohman’s “Accents,” created for TED-Ed’s “There’s a Poem for That” series

Doña Teresa and the Chicken