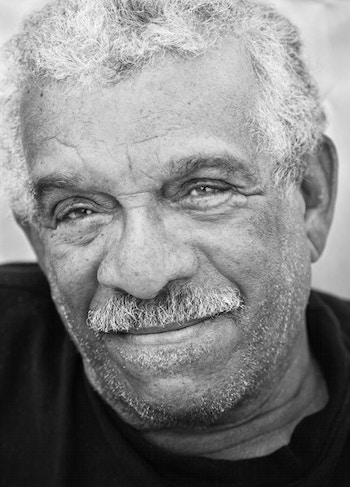 Nobel Prize–winning poet Derek Walcott was born in Castries, the capital of Saint Lucia, a small island nation in the West Indies. His family descended from African, Dutch, and English ancestry, representing multiple facets of the Caribbean’s fraught colonial history. His father, Warwick, a civil servant and gifted watercolorist, died when Walcott and his twin brother were infants. The twins and their sister Pamela were raised by their mother, Alix, a schoolteacher and seamstress who recited poetry at home and encouraged her children’s artistic endeavors. Walcott studied painting with Harold Simmons as a young man before turning his eye for color and landscape to poetry, with inspirations including Milton, Pound, Eliot, and Auden. He published his first poem at 14 in the newspaper The Voice of St Lucia, then followed it with two self-published collections, 25 Poems (1948) and Epitaph for the Young: XII Cantos (1949). The books were funded with $200 from his mother—a sum that was a challenge for her to scrape together—and his friends purchased enough of the print run that he was able to recoup the costs.

After graduating from high school at Saint Mary's College, Walcott won a Colonial Development and Welfare scholarship that permitted him to study at the University College of the West Indies in Kingston, Jamaica. In 1953, he moved to Trinidad, beginning a career as a teacher, journalist, playwright, and cultural critic. Walcott founded the Trinidad Theatre Workshop in 1959 with his twin brother, Roderick, also a playwright. His 1962 collection, In a Green Night: Poems 1948–1960, first brought his poetry worldwide attention for its championing of Caribbean history and culture and keen-eyed analysis of the impact of centuries of colonialism.

Walcott’s subsequent collections number nearly two dozen, including Omeros (1990), his modern reimagining of the Homer epic; Tiepolo's Hound (2000), which contains his watercolors as illustrations; and White Egrets (2010), recipient of the T.S. Eliot Prize and the 2011 OCM Bocas Prize for Caribbean Literature. His 1970 play Dream on Monkey Mountain was produced for TV by NBC and off-Broadway in New York City by the Negro Ensemble Company. It was honored with a 1971 Obie Award for Best Foreign Play. Walcott’s numerous laurels also include a MacArthur Foundation Fellowship, a Royal Society of Literature Award, the Queen's Medal for Poetry, the Griffin Trust for Excellence in Poetry Lifetime Recognition Award, the Anisfield-Wolf Book Award for Lifetime Achievement, and, in 1992, the Nobel Prize in Literature, an honor he was only the second Caribbean writer to receive.

The recipient of an OBE from the British government and one of the first named Knights of the Order of Saint Lucia, Walcott shared his time between Boston, New York, and Saint Lucia for much of his life. He taught for over 20 years at Boston University in the United States, where he founded the Boston Playwrights’ Theatre in 1981. He also taught at Columbia University, Yale University, Rutgers University, Canada’s University of Alberta, and the UK’s Essex University, among other schools. Walcott’s circle of friends spanned poets such as Seamus Heaney, Joseph Brodsky, Elizabeth Bishop, and Robert Lowell, who was an early proponent of Walcott’s work. Walcott married and divorced three times, fathering three children, including the painter Peter Walcott. He lived with companion Sigrid Nama until the end of his life in 2017.

Text: Read poems by Walcott at the Poetry Foundation