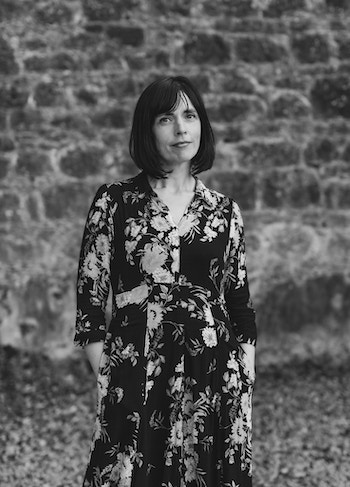 Poet and essayist Doireann Ní Ghríofa was born in Galway and raised in the village of Kilnamona in County Clare. As a child, she was a constant reader. She attended Gaelcholáiste an Chláir in the nearby town of Ennis, where she learned to speak Irish. At University College Cork, Ní Ghríofa first studied to be a dentist at before switching to Applied Psychiatry and Literature, meeting her husband along the way. She obtained a postgraduate degree in primary school teaching and taught young children for several years until having her first child, when she chose to become a stay-at-home mother. Until this point, Ní Ghríofa had had no ambitions of becoming a writer. However, on the night of her grandfather’s death in 2009, something changed: lines of poetry repeated in her head over and over until she wrote them down, forming her first poem. Then and there, writing became a driving force in her life.

Ní Ghríofa’s first two published poetry pamphlets were Résheoid (2011) and Dúlasair (2012), both written in Irish and published by Coiscéim. In 2012, she won the Wigtown Award for Gaelic Poetry for her poem “Fáinleoga.” Her collection Dordéan, do Chroí / A Hummingbird, your Heart (Smithereens Press, 2014) followed. In the same year, Ní Ghríofa was selected for the Ireland Chair of Poetry Bursary Award, a major annual prize. Her first book in English, 2015’s Clasp (Dedalus Press), won the Michael Hartnett Award and was shortlisted for The Irish Times Poetry Now Award. The following year, Ní Ghríofa won the Rooney Prize for Irish Literature. In 2017, she published Oighear, another Irish-language collection, with Coiscéim, and Singing, Still - A Libretto for the 1847 Choctaw Gift to the Irish for Famine Relief, a trilingual pamphlet in English, Irish, and Choctaw that she and Choctaw poet LeAnne Howe collaborated to create.

Ní Ghríofa’s second English-language collection, Lies (Dedalus Press, 2018), gathered Irish poems from her Coiscéim pamphlets and her own translations of the poems into English. In 2018, she also collaborated with visual artist Alice Maher on the fine-press book Nine Silences (The Salvage Press), received Italy’s Premio Ostana and the U.S.’s Lannan Literary Fellowship, and was selected as a Seamus Heaney Centre Fellow at Queen's University Belfast. 2020 saw the release of her first prose book, A Ghost in the Throat (Tramp Press), which won the An Post Irish Book of the Year award, the Hodges Figgis Irish Book of the Year award, and the Foyles Non-fiction Book of the Year award. Lacking a home office, Ní Ghríofa wrote much of the book in three-hour segments on the roof of a car park while her daughter was in daycare. A Ghost in the Throat blends research and auto-fiction to tell the story of a young mother’s fascination with storied Irish poet Eibhlín Dubh Ní Chonaill, touching on the themes of motherhood, death, past, and place often found in Ní Ghríofa’s poetry.

Ní Ghríofa’s poems have been published in magazines including Poetry, The Irish Times, Irish Examiner, and Prairie Schooner. She has performed in countries around the world, and her work has been commissioned by organizations such as The Poetry Society, RTÉ Radio 1, University College Cork, and The Arts Council/Crash Ensemble. She often collaborates on multidisciplinary works in which poetry combines with another art form, including in YouTube videopoems she calls “undercover poetry.” She was recently invited to join Ireland’s prestigious arts group Aosdána. She lives in County Cork with her husband and four children.

Video: A film of Ní Ghríofa’s poem “Recipe for the Bad Times, the Sad Surprise Times, the No Light Times” for Poetry Day Ireland

Audio: Ní Ghríofa discusses A Ghost in the Throat on the City of Books podcast

The Heart of the Wood