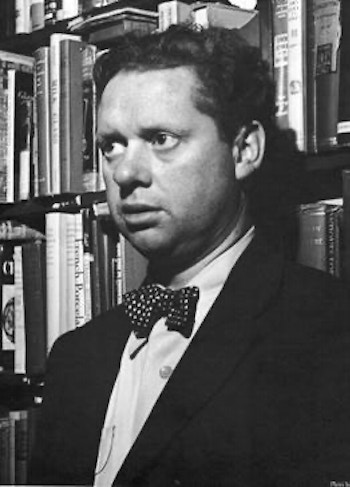 Famed Welsh poet and writer Dylan Marlais Thomas was born in Swansea, Wales, the son of a seamstress and a teacher. An indifferent student, he preferred to read and write poetry outside of his classes. Thomas left school at 16 to become a journalist. He published a number of his major poems while still a teenager, and his first collection, 18 Poems, was released when he was 20 to widespread praise. In 1937, he married dancer Caitlin Macnamara; the couple would have three children over the course of their tempestuous relationship.

Although he continued to publish poetry and prose, Thomas’ need for steady income compelled him to seek out other work. He wrote scripts for radio shows and documentaries before securing an ongoing role recording radio programs for the BBC, including some he wrote himself, such as A Child’s Christmas in Wales and an early sketch for what would become Under Milk Wood. Through these frequent on-air appearances, he gained nationwide celebrity. Beginning in 1950, he toured the United States, giving famously theatrical, alcohol-fueled readings. His last such tour, in 1953, ended with his death: widely attributed to his alcohol abuse, it was likely caused by undiagnosed respiratory conditions. Thomas’ musical, category-defying poetry and larger-than-life persona contributed to a popular appeal that persists to this day.

Do Not Go Gentle Into That Good Night

In My Craft or Sullen Art

Poem on his Birthday

The Force That Through the Green Fuse Drives the Flower