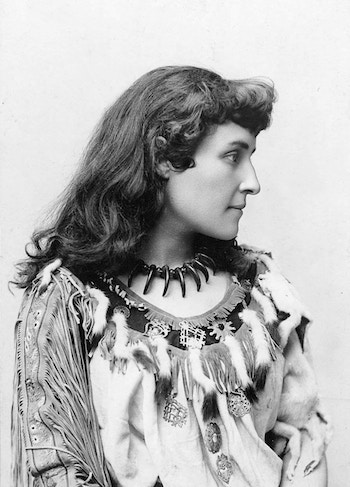 Writer, artist, and performer Emily Pauline Johnson (Tekahionwake) was born near Brantford, Ontario, at the Six Nations reserve. She was the youngest of four children born to Mohawk chief George Henry Martin Johnson and English immigrant Emily Howells. A sickly child who was largely educated at home, Johnson instructed herself in the work of English poets like Keats and Milton and learned the Mohawk language through the traditional storytelling of her father’s father. She began writing poetry in 1884 to support her family, but her career only took off in 1892, after a hugely successful reading at the Toronto Art School Gallery.

Johnson's popular dramatic performances of her work incorporated a costume made up of Mohawk artifacts from her grandparents and drew from poems that both critiqued white Canadians’ treatment of Indigenous peoples and urged mutual understanding between the two groups. One of the first widely known female Canadian poets and Indigenous Canadian poets, Johnson is remembered today as a formative voice in Canadian literature.

The Lifting of the Mist