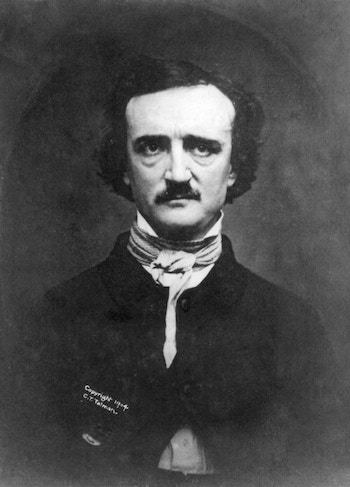 Best known for his pioneering work in horror fiction and for popular poems such as “The Raven,” Edgar Allan Poe was a formative figure across genres and styles: he invented the detective story, contributed to the early development of science fiction, influenced the French Symbolist and Surrealist movements, and helped to fashion the modern short story form.

Poe was born in Boston in 1809 to a pair of professional actors. Orphaned before the age of three, he was taken in by the wealthy Allan family of Virginia. He attended university briefly, leaving due to lack of funds, after which he briefly served in the army, then failed out of West Point. During these years, he actively wrote and published poetry, though it received little attention. In 1835, he joined the masthead of the Southern Literary Messenger, where his work as an editor and literary critic brought him a wider audience and made him one of the first Americans to earn a living on writing alone.

Poe moved between Virginia and the cities of the Northeast for much of his adult life, editing and directing several literary journals. In 1836, he married his teenaged cousin Virginia Clemm, who died a decade later. Influenced by Romantics like Keats, Shelley, and Byron, Poe continued to write poetry and short stories for both books and periodicals. His poem “The Raven” was published in 1845 and became an immediate sensation. Poe died of unknown causes in Baltimore at age 40; due to a rival’s derogatory obituary, his reputation was damaged for decades. However, he is now widely regarded as a literary visionary whose unique personal conception of literary aesthetics drew from Romantic tradition to transform the shape of literature to come.