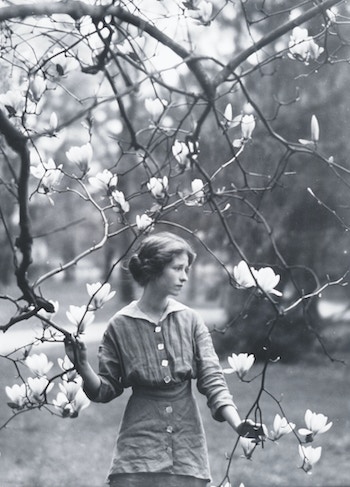 Edna St. Vincent Millay was born in Maine into a poor but literary family, raised largely by a single mother who read Milton and Shakespeare aloud to her daughters. While still in high school, Millay’s poems were published in children’s magazines, and at 20 she found early fame for her poem “Renascence.” In 1917, after her education at Vassar College, Millay moved to Greenwich Village and became part of its avant-garde milieu, forming deep friendships and fending off suitors from the literary world. She wrote potboiler stories under the name Nancy Boyd to eke by. Meanwhile, her poetry surged in popularity: her 1923 collection The Ballad of the Harp-Weaver, an homage to her mother, made her just the third woman to win the Pulitzer Prize in poetry.

A few months after this achievement, Millay married the older widower Eugen Jan Boissevain. The pair established a progressive marriage in which Boissevain had no conventional domestic expectations of his poet bride, which left her free to write and pursue parallel romances. They soon moved to Steepletop farm in the Berkshires and spent their next decades there, with Millay producing plays and a libretto as well as further poetry collections. Millay chiefly worked in traditional forms, like sonnets and ballads, which caused her reputation to decline in the 30s as Modernism came into vogue. But the importance of her work has been reestablished since, with her blunt feminist stance recognized as among the earliest and clearest voicings of the “new woman” of post–World War I America.

Portrait by a Neighbor