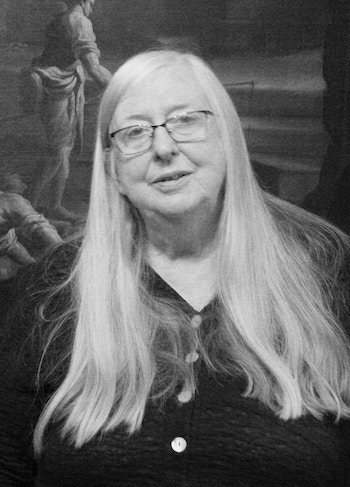 Irish poet, academic, and translator Eiléan Ní Chuilleanáin was born in Cork in 1942. She grew up in literary, intellectual surroundings: the daughter of children’s author Eilís Dillon and novelist and professor Cormac Ó Cuilleanáin, she spent her childhood on the campus of University College Cork. As a young girl, she was awed by the classic poems her mother copied out by hand. As she told Forward Arts Foundation, “I was young enough to think prose fiction…was easier, and people said poetry was difficult, so I said ‘I’ll do that.’” She began writing poetry as a teenager, first finding publication in her early twenties.

Ní Chuilleanáin earned her BA in English and history and her MA at University College Cork, then studied at Oxford University for two years. In 1966, she began what would become a storied forty-five-year career at Trinity College Dublin, where she lectured in Renaissance and medieval literature. Later, she would be elected a Fellow of the College and serve as both Head of the Department of English and Dean of the Faculty of Arts-Letters. Ní Chuilleanáin found life as part of Dublin’s vibrant writing community stimulating: she hung around literary pubs and helped to manage a poetry reading series. Her debut collection, Acts and Monuments (The Gallery Press) was published in 1972, winning the prestigious Patrick Kavanagh Award. In 1975, she founded literary magazine Cyphers with Pearse Hutchinson, Leland Bardwell, and her future husband, Macdara Woods. Now Ireland’s longest-running literary periodical, Cyphers is still primarily edited by Ní Chuilleanáin.

Further collections with The Gallery Press and Wake Forest University Press over the years continued to garner Ní Chuilleanáin acclaim, contributing to her current reputation as one of the great contemporary Irish poets. Her 1989 collection The Magdalene Sermon was chosen as one of the three best poetry volumes of the year by the Irish Times/Aer Lingus Poetry Book Prize Committee, The Sun-fish (2010) won the International Griffin Poetry Prize, and The Boys of Bluehill (2015) was shortlisted for the Forward Prize for Best Collection. Most recently, The Mother House won the 2020 Irish Times Poetry Now Award.

Ní Chuilleanáin’s poetry is noted for its immersive worldbuilding and its linkage of the spiritual with the natural and the mundane. The poet explores a wide range of themes, including folklore, architecture, music, and religion, as well as her academic areas of interest. In addition to writing poetry, she publishes academic work and has translated poets from Irish, Romanian, and Italian. A member of Aosdána, Ní Chuilleanáin has served as Ireland Professor of Poetry and as editor of Poetry Ireland Review. She was awarded the O'Shaughnessy Poetry Award by the Irish American Cultural Institute. Her husband passed away in 2018; the pair had one child, Niall Woods. Ní Chuilleanáin lives in Dublin.

Video: Ní Chuilleanáin reads and discusses her poem "To Niall Woods and Xenya Ostrovskaia, married in Dublin on 9 September 2009" on Poetry Ireland's Behind the Lines series

Audio: Ní Chuilleanáin on her own and her husband's poetry on RTÉ’s Poetry Programme