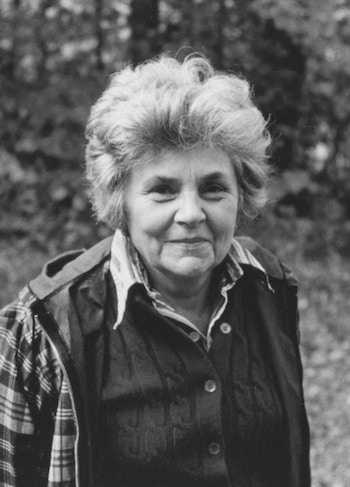 Elizabeth Bishop was born in Worcester, Massachusetts, in 1911. An only child, her father died when she was an infant; her mother’s subsequent decline in mental health led to her permanent commitment into a mental institution a few years later. The young Bishop spent some time living happily with her mother’s family in Nova Scotia before her father’s parents arranged for her to return to Massachusetts. Isolated in this emotionally cold environment, she developed severe asthma and was sent to live in a seaside town near Boston, where her aunts read her Victorian poetry during her long weeks of recovery.

Bishop boarded at Walnut Hills School for Girls before attending Vassar College, where she became friends and co-founded a literary magazine with novelist Mary McCarthy. She also met the poet Marianne Moore. The pair mutually impressed each other, and Moore became both influence and advocate for the younger poet; Bishop, whose poetry had previously leaned on the stylized language of earlier British forms, was galvanized by Moore’s sharp, sparing work. Upon graduating, Bishop moved to New York, then began what would become a career of travel enabled by her inheritance from her father. She visited North Africa and countries across Western Europe before moving to Key West with her lover, Louise Crane, for several years. Here, she wrote many of the poems in her first collection, North and South, which would be published in 1946. Her poetic voice was already fully developed in this debut, showcasing her meticulous care with language, emphasis on images and impressions, and subtle handling of human emotion.

North and South won the Houghton Mifflin Prize for poetry; three years later, Bishop’s friend Robert Lowell secured her a one-year term as Poetry Consultant for the Library of Congress. However, this rapid ascent in Bishop’s literary reputation did little for her struggles with alcoholism, depression, and writer’s block. In 1951, Bishop booked a trip to Brazil to escape her troubles. There, she met up with an acquaintance, the architect Lota de Macedo Soares, and the two women fell in love. She lived with Soares in Petrópolis for the next 14 years. In 1967, Soares committed suicide while visiting Bishop in New York, adding another name to the list of losses the poet had suffered. Bishop turned next to teaching and spent seven years as a lecturer at Harvard University.

A perfectionist who suffered long spells of writer’s block and could spend years editing a single poem, Bishop produced only 101 published poems during her lifetime. However, the few books she published won her a name as one of the major poets of the 20th century. Her 1955 volume, Poems: North & South—A Cold Spring, garnered her the Pulitzer Prize, and her Complete Poems of 1969 won the National Book Award; 1977’s Geography III brought her to international attention. Some of her many additional honors include the Neustadt International Prize for Literature, an American Academy of Arts and Letters Award, fellowships at the Academy of American Poets and the American Academy of Arts and Sciences, and a National Book Critics Circle Award. Bishop died in Boston in 1979.

Text: An interview with Bishop in The Paris Review's The Art of Poetry series

Text: Bishop's poem "The Moose" at Academy of American Poets