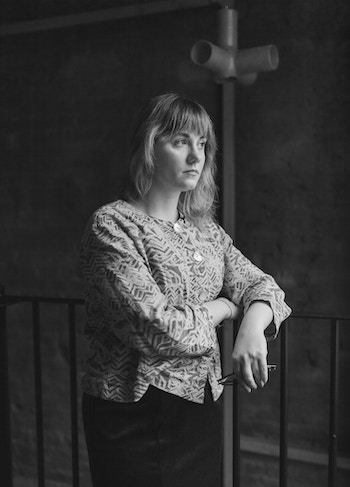 Ellen Moran is a poet and community activist from Newcastle in North East England. She left the city to attend university, living in Manchester and London before moving back. She began writing poems in 2018, when a bad breakup serendipitously found her celebrating Valentine’s Day by attending a poetry reading.

Moran, who writes for both page and stage, found quick success in the spoken-word scene. She won the Great Northern Slam 2018 and was a semi-finalist in the Hammer and Tongue UK Final 2019. In 2018, she participated in the Poetry Exchange, in which poets from London’s Spoken group and Newcastle's Born Lippy joined up to perform at each other's events, showcasing the similarities and differences between their local cultures. In the second stage of the exchange, which saw poets partnered between cities, Moran collaborated with Mark “Mr. T” Thompson on a poetry film on the theme of fighting against oppression. In 2019, Moran received a commission from Poet in the City to work on a Newcastle extension of the British Library exhibition Unfinished Business: The Fight for Women's Rights. As part of the programming, she brought poetry and events to Newcastle Libraries and worked directly with women at the nonprofit Tyneside Women's Health.

2020 found Moran commissioned for The Box Plymouth’s State of Emergency, a project exploring the meaning of freedom in the context of the COVID-19 pandemic. Moran produced a spoken-word piece that examined patriarchal control of bodies and its impact on physical autonomy. Later that year, she was commissioned by Green Croft Arts to write a poem for their Collision & Conflict sound walk on Hadrian's Wall. In 2021, she appeared on Poet in the City’s Common Language initiative, which paired poets with activists and academics to discuss the terminology of current affairs and social issues. Moran spoke with activist and textile artist Ghazal Haqani on housing precarity in the private and public sectors. Most recently, Moran participated in 2022’s Herstory Festival, reading with fellow Newcastle poets Degna Stone and Sky Hawkins. As part of the festival, she also created Protest Library, a mini-exhibition and performance space exploring past and present women’s protest in the North East.

Moran finds meaning in harnessing her poetic talents for community activism; she works in communities delivering poetry and spoken word performances on social justice topics such as feminist protest, power structures, and the housing crisis. She also collaborates directly with community members, guiding local groups in creating poetry to express their own stances and struggles. Moran has worked for tenants’ rights both as part of a tenants’ union and as a community organizer. She currently coordinates a community project in a low-income area of Hexham, whose offerings include a community garden, a medicinal herb garden, a digital inclusion program, employment and benefit support, and a credit union.

Audio: An interview and reading by Moran with Chantal Herbert of Sister Sounds