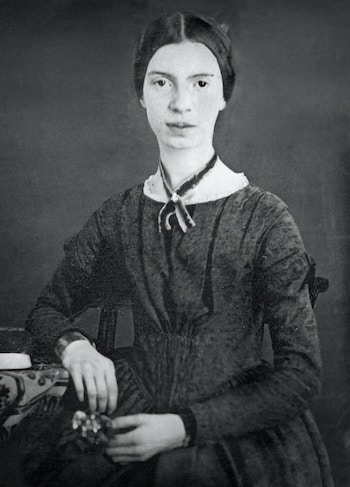 Emily Dickinson was born in Amherst, Massachusetts, to Edward Dickinson and Emily Norcross Dickinson. She was the second of the family’s three children and was close with both her elder brother, Austin, and her younger sister, Lavinia. The Dickinson family had a long history in the small town, having arrived as part of the Puritan Great Migration, and both Edward and his father Samuel were active in political and civic life there. The family lived in the Homestead, a mansion on Main Street that would be Dickinson’s home for all but a few months of her life.

Dickinson showed an early talent for academic pursuits. Until age 15, she was educated at Amherst Academy, whose curriculum was as wide-ranging as any boys’ school of the time, covering English literature, Latin, philosophy, natural history, and the sciences. There, she made many lifelong friends, including Susan Huntington Gilbert. Gilbert would go on to marry the poet’s brother Austin and become a central figure in her life; for the adult Dickinson, Gilbert was dear friend, intellectual comrade, editor, and, possibly, romantic interest. In 1844, Dickinson’s cousin died of typhus, sending her into prolonged melancholy. This was the first of many deaths that would traumatize the deeply sensitive poet over her lifetime. Dickinson attended Mount Holyoke Female Seminary for less than a year before returning to Amherst. Back at home, she met the young lawyer Benjamin Franklin Newton, who introduced her to new literary works, such as the poems of Ralph Waldo Emerson, whose message of self-determination and embrace of the natural world resonated with her. Other major influences on Dickinson’s poetry included the Metaphysical poets, the Brownings, and John Keats, as well as the tenets and hymns of the Puritan Christian tradition.

In the 1850s, Dickinson’s mother developed chronic illnesses that left her unable to tend to household duties, so her elder daughter stayed close at hand. Dickinson’s well-known reclusiveness is first recorded here; she soon stopped leaving the Homestead altogether. This period, however, was greatly productive for her poetry. Dickinson wrote prolifically during this time, and she also gathered over 800 of her poems into small hand-bound manuscript booklets, known as fascicles, producing definitive versions of each poem. Despite her seclusion, she continued to correspond with friends and form new intellectual connections, particularly with men. One such relationship was with Samuel Bowles, owner of the Springfield Republican, who published several of her poems; another was with critic and public figure Thomas Wentworth Higginson, whose essay on getting published sparked a letter from Dickinson that grew into a lifelong correspondence.

Dickinson resumed a more conventional social life for some time, then withdrew from society again, refusing to leave the Homestead or to see visitors to the house. She also began to wear her characteristic white clothes. The deaths around her continued to accumulate: her father died in 1874, her mother in 1882, and her favorite nephew in 1883, and several admired friends passed away as well. 1884 brought prolonged periods of illness that lasted on and off until Dickinson’s death in 1886. With her sister’s advocacy, a highly edited collection of the poems came out four years after her death. It found huge success with the public and was followed by many further editions. It was not until 1955, with Thomas H. Johnson’s edition, that the poems were restored to their intended forms. The unusual punctuation, transformative metaphors, and use of off rhyme Dickinson’s poetry is known for were her own innovations—all wholly unprecedented in her time—and her subtle and highly developed themes of life, death, religious faith, and nature demonstrate the deep insight of her personal vision of the world. Dickinson is considered to be one of the great and defining voices of American poetry.

Resource: The Emily Dickinson Museum hosts information about Dickinson and other educational resources.

A Bird came down the Walk

Because I could not stop for Death

Before I got my eye put out

Bloom — is Result — to meet a Flower

I dwell in Possibility—

I felt a Funeral, in my Brain

I heard a Fly buzz—when I died—

I started Early—Took my Dog—

In this short Life

It was not Death, for I stood up

It’s all I have to bring today

Much Madness is divinest Sense

Tell all the truth but tell it slant

The Grass so little has to do

There’s a certain Slant of light

This is my letter to the World

This World is not Conclusion

To make a prairie

We grow accustomed to the Dark—

You cannot put a Fire out—

“Hope” is the thing with feathers