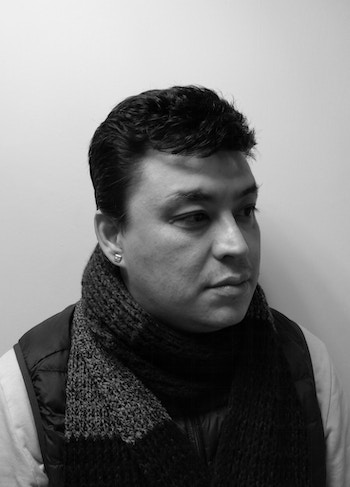 Evgeny Shtorn is a poet, scholar, and LGBTQ activist. Born in the Kazakh Soviet Socialist Republic in 1983, he moved to St. Petersburg, Russia, in 2000. He completed a master’s degree in sociology at the Higher School of Economics, for which he studied hate crimes against LGBTQ community members and murders of gay men, with a focus on how these groups were killed and oppressed in Russia. While in St. Petersburg, he also met his current partner, fellow sociologist and LGBTQ rights activist Alexander Kondakov. Both worked at the Centre for Independent Social Research, a foreign-funded NGO and think-tank.

In 2018, Shtorn was forced to leave Russia due to political repression by the Russian government, including the legislation against independent NGOs known as the foreign agent law and the Russian gay propaganda law enacted in 2013. He claimed international protection in the Republic of Ireland. There, he started his first manuscript, “Chronicles of Refugee,” about life in direct provision, the Irish system of accommodation for people in need of international protection. Shtorn also studied community development, working toward a postgraduate diploma at NUI Galway. In late 2019, he was granted refugee status in Ireland.

Shtorn continues to engage in research and activism in Ireland, where he plays a significant role in both the LGBTQ and poetry communities. He studies the persecution suffered by the LGBTQ population in Russia, as well as investigating the living conditions in Ireland's Direct Provision system for refugees and incorporating his personal experience there. He is known for his raw, personal poetry and analysis of the social issues he is involved with. Shtorn speaks and writes in English, Russian, and Spanish. Many of his works are in Russian and describe the horrors, discomforts, and extreme loneliness of life as a member of a marginalized community, specifically exploring the plight of statelessness and oppression.

Shtorn has contributed to several poetry anthologies, most recently Writing Home: The ‘New Irish’ Poets from Dedalus Press, and Correspondences: An Anthology to Call for an End to Direct Provision, edited by Stephen Rea and Jessica Traynor, both published in 2019. He has also been published in journals including Stinging Fly and Trumpet. He coordinates "Something from There" at the National Gallery of Ireland, a project exploring the idea of home by gathering materials and stories of people seeking asylum in Ireland. He also works as the manager for Queer Diaspora Ireland, which supports LGBT people in direct provision. For his efforts in this field, Shtorn received the GALAS Person of the Year Award 2020 from the National LGBT Federation of Ireland.

Video: Shtorn's acceptance speech for GALAS Person of the Year 2020

Text: A contribution from Shtorn for the National Gallery of Ireland’s “Something from There” project