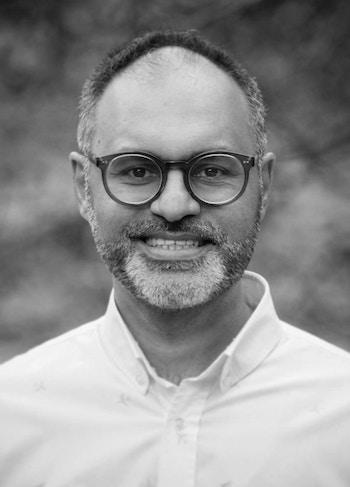 Writer, visual artist, and educator Faisal Mohyuddin was born and raised in the suburbs of Chicago, Illinois. The son of Pakistani immigrants, he earned his undergraduate degree in English from Carleton College, his MSEd from Northwestern University, and his MFA in fiction writing from Columbia College Chicago. He is also a former fellow of the of the U.S. Department of State’s Fulbright Teachers for Global Classrooms program.

The Riddle of Longing, Mohyuddin’s debut chapbook, was published by Backbone Press in 2017. His full-length collection, The Displaced Children of Displaced Children (Eyewear Publishing, 2018), won the 2017 Sexton Prize for Poetry and was chosen as a Poetry Book Society Recommendation for Summer 2018. The book was also named a highly commended collection of the year by the Forward Arts Foundation and garnered an Honorable Mention from the Association of Asian American Studies 2020 Book Award for Poetry.

Mohyuddin is the recipient of the 2014 Edward Stanley Award from Prairie Schooner, a 2017 Gwendolyn Brooks Poetry Prize, and an Illinois Arts Council Literary Award. His poems have appeared in Poetry Magazine, The Margins, Pleaides, Prairie Schooner, Kweli, Painted Bride Quarterly, the Missouri Review, RHINO, and many other magazines and journals. He has also been published in the anthologies Indivisible: An Anthology of Contemporary South Asian American Poetry (University of Arkansas Press, 2010) and The Forward Book of Poetry 2019. His visual art was featured in the 2020 American Muslim Futures virtual exhibit, co-created by Muslim Advocates and the Shangri La Museum of Islamic Art, Culture & Design.

Mohyuddin has taught English at Highland Park High School in Illinois since 2003. He also serves as an educator-advisor to the international nonprofit Narrative 4 and teaches creative writing at the School of Professional Studies at Northwestern University. Mohyuddin lives with his wife and son in Chicago.

Video: Mohyuddin reads his poem “The Faces of the Holy" for the Poetry Foundation's Ours Poetica series

Audio/Text: Mohyuddin's poem "Ghazal for the Lost" at Glass Poetry

Ghazal for the Diaspora