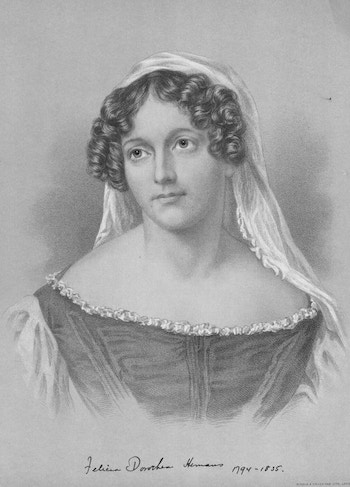 Late Romantic poet Felicia Dorothea Hemans, née Browne, was born in Liverpool, England, the fifth of seven children. Her father was a merchant, and her maternal grandfather was the Venetian consul to Liverpool. As a girl in Georgian England, Hemans was educated at home, where she learned several languages from her mother and read precociously from the family’s home library. By age six, she counted Shakespeare as her favorite writer.

Hemans’ first collection of poetry, Poems, was published when she was just 14. It would be followed by 18 more, bringing her popular acclaim and friendships with major literary figures including Lord Byron, William Wordsworth, and Sir Walter Scott. She was married for several years to Irish army officer Captain Alfred Hemans, with whom she had five sons before the couple separated. After the split, Hemans was able to support her children independently through her earnings as a poet. Although she was widely read during her lifetime and in the century after, her poetry’s use in primers and schoolbooks meant she was eventually considered a children’s poet, a minimization called into question in recent years. Hemans died of dropsy at age 41.

The Rock of Cader Idris