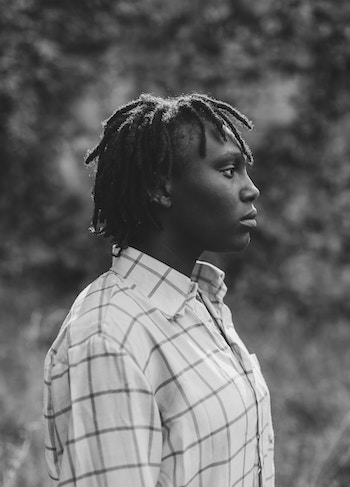 Felicia Olusanya, a.k.a. FeliSpeaks, was born in Ogun State in southwestern Nigeria. She and her mother moved to Longford, County Longford, Ireland, in 2003, when she was eight years old. Before finding a permanent home, they lived for six months at the Baleskin direct provision center in Dublin. FeliSpeaks grew up experiencing and appreciating art: as a child, she was a ravenous reader, appeared frequently in school plays and concerts, and participated in a gospel choir, where she learned to be comfortable on stage. She was introduced to poetry while young and began jotting down her own poetry in a “book of thoughts” at age twelve.

FeliSpeaks attended Maynooth University, where she studied English and sociology. She first came to the poetry stage after a slam competition that led her to represent Maynooth in an intervarsity slam. Through the slam circuit, she established herself as a poet, performer, and playwright. In 2018, she co-wrote her first play, Boy Child, with Dagogo Hart—a story about a boy without a father navigating what it means to be a man through the eyes of the women in his life. Boy Child was featured at the Dublin Fringe Festival, selling out and earning Felicia a nomination as Best Performer.

FeliSpeaks is represented in the 2021–2023 Leaving Certificate English Language curriculum with her poem "For Our Mothers.” A newly appointed board member of Poetry Ireland as of August 2020, FeliSpeaks is also a member of Dublin City Council Culture Company’s Culture Advisory Panel. She is a former contributor to Word Up Collective and a founding member of poetry collective WeAreGriot, composed of herself, Dagogo Hart, and Samuel Yakura.

Video: On RTÉ's "The Next Normal," FeliSpeaks performs her poem "Still"

Video: FeliSpeaks reads "How About Us" for Word Up Collective

When You Are Old