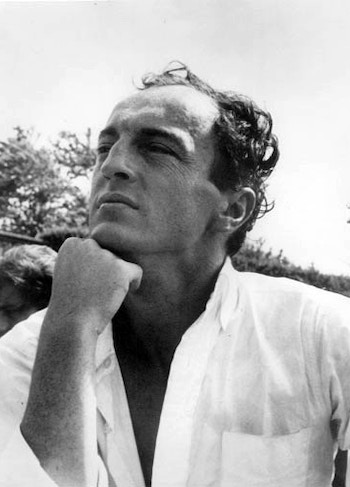 Frank O’Hara was one of the defining figures of the New York School poetry movement. Born in Baltimore and raised in Grafton in central Massachusetts, he planned from a young age to be a concert pianist and studied for a time at the New England Conservatory. He served in World War II before attending Harvard, where he made the decision to change his major to English and become a writer. O’Hara received his master’s degree in English literature from the University of Michigan in 1951 and promptly moved to New York City, where he would live for the rest of his life. He worked for the Museum of Modern Art for many years, ascending from sales clerk to associate curator with no formal artistic training. He also wrote art criticism for ARTNews and befriended painters including Larry Rivers, Jane Freilicher, Grace Hartigan, Jasper Johns, and Jackson Pollock. O’Hara, known for his expansive social and romantic lives, met longtime partner Vincent Warren, a ballet dancer, in 1959.

Donald Allen’s 1960 anthology The New American Poetry brought O’Hara’s work and that of his peers to public attention, and the New York School of poets incorporating O’Hara and friends such as John Ashbery, Barbara Guest, Kenneth Koch, and James Schuyler began to coalesce. O’Hara’s poetry is distinctive for his casual, personal style, which captured scenes from his everyday life in New York City. The poet also drew deeply from New York’s burgeoning postwar counterculture, finding inspiration in painting, music, and dance. He published several small collections of poetry with independent presses, including 1965’s famous Lunch Poems, and his posthumously published The Collected Poems of Frank O'Hara shared the 1972 National Book Award for Poetry. O’Hara died in a car accident in 1966.

Having a Coke with You

Why I Am Not a Painter