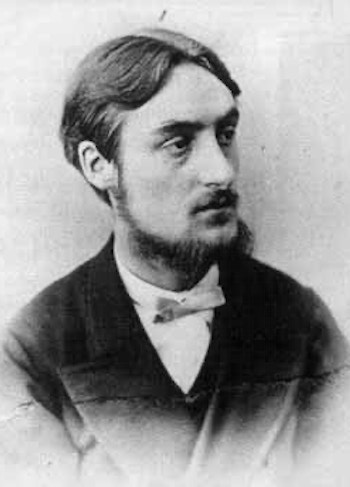 Victorian poet Gerard Manley Hopkins was born in Stratford, Essex, UK, the eldest of nine children. His parents were devout High Church Anglicans. Both branches of his family were educated and artistic: his mother, the daughter of a doctor, loved music, literature, and German philosophy, and his father, founder of a marine insurance firm, was a poet and literary critic himself. With support from visual artists in his extended family, Hopkins learned to draw at a young age and planned to become a painter.

Hopkins attended the Highgate School in London, where he wrote his first poem, “The Escorial,” inspired by his studies of Romantic poetry. He was first published at age 18, with his poem “Winter with the Gulf Stream” appearing in the magazine Once a Week. Hopkins went on to study classics at Oxford’s Balliol College, receiving first-class honors. There, he befriended fellow poet Robert Bridges, a future Poet Laureate of the United Kingdom who would champion Hopkins’ work after his death. Hopkins also became close with the great critic Walter Pater and met the Pre-Raphaelite poet Christina Rossetti, who would become his foremost contemporary influence. Always a deeply religious person, Hopkins began exploring the practice of asceticism in earnest while at university, ultimately converting to Roman Catholicism in 1866. This choice caused a rift with his family, particularly with his parents, that grew over time into full estrangement.

In 1868, Hopkins determined to enter the Roman Catholic ministry as a Jesuit. He burned all his poetry, as he felt a career as a poet was incompatible with a life dedicated to religion, and channeled his literary impulses into a prose journal. Hopkins only began writing poetry again in 1875, when his religious superior requested a commemorative poem about a shipwreck that killed 157 people, including 5 Franciscan nuns. The result was “The Wreck of the Deutschland,” the first full-fledged appearance of the “sprung rhythm” Hopkins invented. Rather than proscribing a set number of syllables per foot, this rhythm begins each foot with a stressed syllable followed by a varying number of unstressed syllables, evoking the cadence of early Anglo-Saxon poetry and bridging the gap between conventional meter and free verse. Hopkins’ other innovations include drawing from Welsh poetry’s use of repeating sounds and from the Old English tradition of the kenning, resulting in sonically and imagistically striking poems that were wholly his own.

Hopkins was ordained as a Jesuit minister in 1877, after which he worked variously as a teacher, curate, and finally as a professor of Greek and Latin at University College Dublin. Although he continued to write poetry, he struggled with balancing the desire for a creative, necessarily public life with the humility and privacy his religious obligations required. Isolated from family and community, and seeing himself as failing to achieve both his artistic and spiritual objectives, he became increasingly depressed. He died of typhoid fever in 1889.

Although Hopkins had been scantly published during his lifetime, his old friend Robert Bridges saw the great originality of his work and put out a collected volume of his poems in 1918. His poetry found increasing popularity in the 1930s, influencing major poets such as W. H. Auden, Seamus Heaney, Sylvia Plath, and Dylan Thomas. Hopkins is now widely considered a pioneer of prosody and an essential link in the transition from Victorian poetry to modernism.

Audio: Readings of five Hopkins poems by Simon Russell Beale and others

I wake and feel the fell of dark, not day

No worst, there is none. Pitched past pitch of grief.