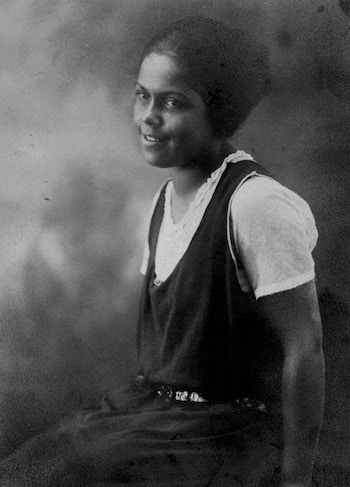 Artist and writer Gwendolyn Bennett was born in Giddings, Texas, and raised in Nevada and Washington, D.C., until the divorce of her parents when she was seven years old. Her mother received custody of her, but she was kidnapped by her father, and she spent the rest of her childhood with him and his second wife in various cities, ending up in Brooklyn, New York. Bennett studied fine arts at Columbia University and Pratt Institute, graduating in 1924. Her poetry was published in cornerstone Harlem Renaissance magazines Crisis and Opportunity while she was still an undergraduate.

After a scholarship took her to Paris’ Académie Julian and École du Panthéon to study the fine arts further, she returned to the United States. There, she became a central figure of the Harlem Renaissance: she was assistant editor for Opportunity; co-founder of the vital but short-lived journal Fire!!; writer of the column “The Ebony Flute,” which covered and promoted Black Harlem culture; and designer for iconic covers of literary magazines of the time. Bennett wrote overtly lesbian romantic poetry, making her one of the first American poets to do so, and founded Harlem Circles, a system of supportive community groups for Harlem Renaissance creatives. She married twice, divorcing her first husband, and spent her final years running an antique shop in Pennsylvania.