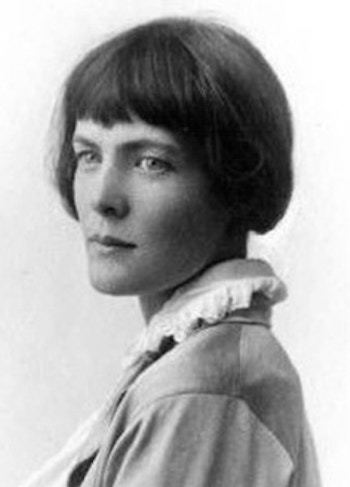 Poet and novelist Hilda Doolittle, known by the pseudonym H.D., was born to an artist mother and scientist father in Bethlehem, Pennsylvania, the only daughter among many brothers. In 1911, she traveled to Europe and remained there as an expat for the rest of her life, maintaining friendships with other major writers like Ezra Pound, Marianne Moore, and William Carlos Williams. H.D.’s innovative poetry of the 1910s helped birth the Imagist movement: a short-lived school whose rejection of Victorian prolixity and sentiment in favor of precise language and experimentation with free verse laid the groundwork for literary modernism. Her influence in poetry was at first reduced by critics to these seminal years; however, since the 1970s, her wider impact has been more broadly acknowledged. H.D.’s experimental works Trilogy and Helen in Egypt, which explore myth and gender to refashion the classical epic tradition, are particularly celebrated, and her straightforward depictions of her love relationships with both men and women have brought her recognition as a pioneering LGBTQ figure.

Hermes of the Ways