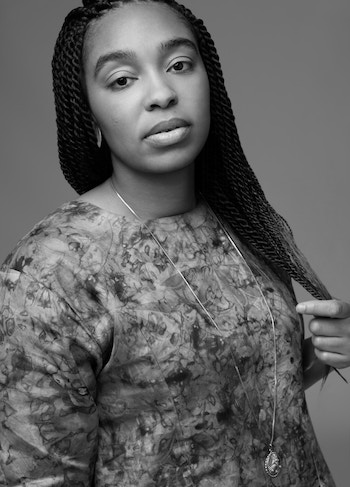 Poet, writer, and editor Hafizah Geter was born in Zaria, Nigeria, the daughter of a Nigerian Muslim mother and a Black Southern Baptist father raised in Alabama. Her family moved to the United States when she was young, making their home in Akron, Ohio, then in South Carolina, where the young poet and her sister came of age. Geter attended Clemson University as an undergraduate and received her MFA in poetry from Columbia College Chicago.

Geter’s poems have appeared in publications including The New Yorker, Tin House, Narrative Magazine, Longreads, and Boston Review. She is a Cave Canem fellow and a recipient of Poets & Writers’ Amy Award and recognition as a Blacksmith House Emerging Writer. A member of the Brooklyn Book Festival’s planning committee, she also served as an editor for Phantom Books and a longtime board member for VIDA: Women in the Literary Arts. She currently works as an editor at Amazon Publishing’s Little A and TOPPLE Books imprints. Her debut poetry collection, Un-American, is forthcoming in September from Wesleyan University Press. Geter lives in Brooklyn, New York.