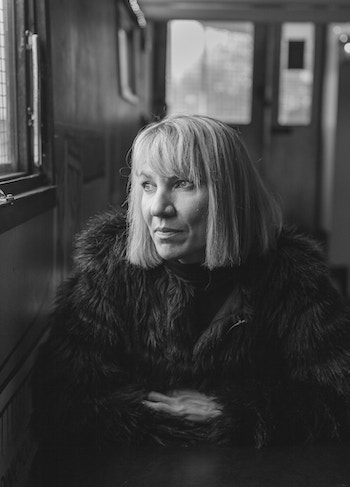 Poet Hannah Lowe was born in Ilford, Essex, to an English mother and a mixed-race Chinese-Black father, nicknamed Chick. Her father was a significant but distant figure in the young poet’s life. His racial difference, odd hours of work as a professional gambler, and age—he had fathered Lowe and her brother when in his fifties—kept him at arms’ length from the rest of the family. Further complicating this dynamic, both children were white-passing and did not conceive of themselves as multiracial. When studying American literature at the University of Sussex, Lowe was drawn to postcolonial writing and Black literature, realizing later that these were essential lenses on her own family history and her father’s past. Soon after this revelation, her father died of cancer, leaving Lowe to process and reassemble his life story largely on her own.

Lowe had been writing poetry since age 29, and in 2010, she turned her focus to her father, aided by his notebooks and recordings. Lowe’s first pamphlet, The Hitcher (Rialto, 2011), included several poems venturing into family history. This fertile poetic ground was explored more deeply in her debut full-length collection, Chick, published by Bloodaxe Books in 2013. Titled for her father’s nickname, the book ranges over his tumultuous youth in Jamaica, his 1947 immigration to London on the SS Ormonde, and his life as a professional gambler in London, as well as examining Lowe’s difficult relationships with her brother and father. Chick won the Michael Murphy Memorial Award for Best First Collection and was shortlisted for the Forward, Seamus Heaney, and Fenton Adelburgh Best First Collection Prizes. In 2014, the Poetry Book Society included Lowe among the 20 members of its Next Generation Poets list.

Lowe, who already held a master’s in refugee studies, completed her PhD in creative writing from Newcastle University while continuing to write poetry on themes of heritage, immigration, race, and prejudice. In 2015, her family memoir, Long Time, No See, was published by Periscope and featured on BBC Radio 4’s Book of the Week. Her second poetry collection, Chan (Bloodaxe, 2016), incorporates research on migration to examine the life of her father’s cousin, Jamaican-British alto saxophonist Joe Harriott, and the stories of the Jamaican migrants who traveled from Kingston to Liverpool on the SS Ormonde alongside her father. Lowe’s other publications include the pamphlets Rx (sine wave peak, 2013) and Ormonde (Hercules Editions, 2014).

In 2017, Lowe became Poet-in-Residence at Keats House, and in 2018, she was commissioned as a writer for the Colonial Countryside Project, organized by the University of Leicester and Peepal Tree Press. She has held numerous poetry education and mentorship roles. Lowe’s most recent publication was the pamphlet The Neighbourhood, published by Out-Spoken Press in 2019. She currently teaches creative writing at Brunel University.