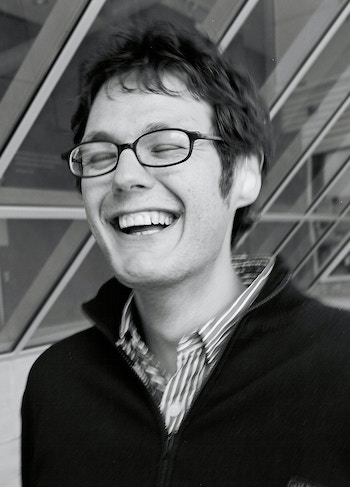 Poet Ilya Kaminsky was born in Odessa, Ukraine, in 1977, then part of the Soviet Union. He lost most of his hearing after a misdiagnosed case of mumps in early childhood. His Jewish family endured anti-semitism in the USSR and were granted political asylum by the United States, emigrating there in 1993. Kaminsky had written poetry in Russian as a teenager, including a chapbook, The Blessed City, and began to write in English after his father’s death in 1994. He received a BA from Georgetown University and a JD from the University of California, Hastings College of Law.

Kaminsky’s first poetry full-length, Dancing in Odessa, was published by Tupelo Press in 2004 and won awards including the Dorset Prize and the American Academy of Arts and Letters Metcalf Award. His 2019 collection, Deaf Republic (Graywolf), won a host of accolades: it was named a Notable Book of the Year by the New York Times and many other publications; won the Los Angeles Times Book Prize, Anisfield-Wolf Book Award in Poetry, and National Jewish Book Award; and was a finalist for both the National Book Award and National Book Critics Circle Award. Kaminsky has been the recipient of an Academy of American Poets Fellowship, a Guggenheim Fellowship, a Whiting Award, a Lannan Fellowship, and other honors. He is also a frequent editor and translator, with titles including the Ecco Anthology of International Poetry (HarperCollins) and Dark Elderberry Branch: Poems of Marina Tsvetaeva (Alice James Books) as well as editorship of the Poets in the World series. He previously worked as a law clerk for Bay Area Legal Aid and the National Immigration Law Center. Kaminsky currently holds the Bourne Chair in Poetry at Georgia Institute of Technology, where he directs the Poetry@Tech Program, and lives in Atlanta.

We Lived Happily During the War