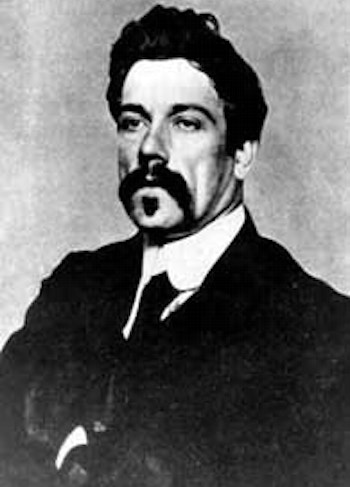 Edmund John Millington Synge—poet, playwright, and leading Irish Literary Revival figure—was born in Rathfarnham, near Dublin, Ireland. His father, a barrister, died when Synge was a year old; his mother raised him and his four older siblings near her mother’s home in nearby Rathgar. He attended private school until becoming too ill to continue, at which point his mother found a tutor to teach him at home. Synge’s first deep interest was music: he studied music theory and piano, flute, and violin at the Royal Irish Academy of Music, winning a scholarship in counterpoint. He attended Trinity College, Dublin, where he continued to study music, as well as Irish and Hebrew.

Determined to become a musician, Synge traveled to Germany in 1893 to further his studies. His first documented poem, “Kottabos: A College Miscellany,” was published this year. He soon altogether transferred his ambitions to literature and languages, through which he could avoid the anxiety of performing in public. Synge returned to Ireland, then moved to Paris in 1895 to attend the Sorbonne. In December of 1896, he met W. B. Yeats, who encouraged him to leave continental Europe and move to the Aran Islands. In this rugged, remote place, where daily life harkened back to a rapidly disappearing Irish past, Yeats felt Synge could develop his literary talents by “find[ing] a life that has never been expressed in literature.” Synge took his advice, traveling back and forth from the Aran Islands for the next several years. As Yeats had hoped, Synge’s impressions of the denizens and culture of the Aran Islands would inform much of his future writing, and his first major work, The Aran Islands, was a nonfiction book on the subject.

In 1903, Synge, Yeats, Edward Martyn, and Lady Augusta Gregory formed the Irish National Theatre Society. Under this aegis, they founded the Abbey Theatre the following year, intended as an Irish cultural hub and incubator for emerging Irish playwriting talent. Synge had submitted his first play, When the Moon Has Set, to an earlier iteration of the group, though it was rejected; his next two plays, however, were accepted by Lady Gregory and produced. Both The Shadow of the Glen and Riders to the Sea were criticized by Irish nationalists for their unvarnished portrayal of Irish characters and refusal to idealize the country’s peasantry. His next play for the Abbey, The Well of the Saints, also met with popular disapproval for these reasons. However, the harshest reactions were reserved for his widely acknowledged masterpiece, The Playboy of the Western World: the play famously sparked riots in Dublin for its descriptions of County Mayo women, and the audience’s hissing was so loud that the third act had to be performed in pantomine.

Despite the responses of his public, Synge’s plays were championed by many literary contemporaries and are now considered foundational to modern Irish theater. His realistic portrayal of Irish rural life became the template for decades of playwriting, influencing such dramatists as Sean O’Casey and Samuel Beckett. Synge’s life was brought to an early end by Hodgkin lymphoma, leaving him with a scant oeuvre of plays, prose, and poetry; today, he is remembered as the most significant playwright of the Irish literary renaissance.

Text: Read all of Synge’s works at Project Gutenberg

Video: The Playboy of the Western World performed by New England Youth Theatre