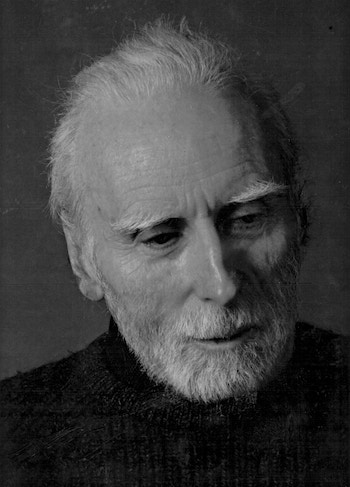 Jack Gilbert was born and raised in Pittsburgh, Pennsylvania. An indifferent student, he failed out of high school, then worked as a door-to-door salesman, an exterminator, and a steelworker before being admitted to the University of Pittsburgh via a clerical error. In school, he befriended Gerald Stern, and the two found a shared interest in poetry. He moved to Europe after graduating, where he worked as a journalist. After the breakup of a relationship, he came to San Francisco, where he mingled with Beat poets Allen Ginsberg and Jack Spicer and received his master’s degree from San Francisco State University. His first book, Views of Jeopardy, won the Yale Younger Poets prize in 1962, and the surrounding publicity made him a household name in the United States.

From 1964 until the death of his wife, the sculptor Michiko Nogami, in 1982, Gilbert primarily lived abroad in England, Denmark, Greece, and Japan. At one point, he toured fifteen countries lecturing on American Literature for the U.S. State Department. Though Gilbert published infrequently for a major poet, each of his few books continued to resonate with new generations of readers. His second collection, Monolithos (1982), won both the Stanley Kunitz Prize and the American Poetry Review Prize, and his fourth, Refusing Heaven (2005), won the National Book Critics Circle Award. His Collected Poems was a finalist for the 2013 Pulitzer Prize in Poetry. Gilbert taught in American schools including Smith College and the University of Tennessee in his final years. He died in Berkeley, California, in 2012.

Bring in the Gods