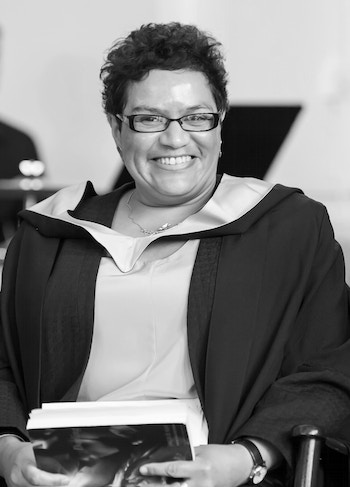 Jackie Kay was born in Edinburgh to a Scottish mother and Nigerian father. She was adopted as a baby by the Kay family, a white Scottish couple active in progressive politics. As a teenager, she attended readings by poets including Liz Lochhead and Tom Leonard, both of whom would later become friends. Kay aspired to become an actor, but when the writer Alasdair Gray praised her poetry, she refocused her energies on writing.

Her debut poetry collection, The Adoption Papers (Bloodaxe, 1991), was awarded both the Eric Gregory Award and the Scottish Arts Council Book Award, and her first novel, Trumpet (Random House, 1998), won the Guardian Fiction Prize. Kay’s many publications since, which include plays and a memoir as well as novels and poetry collections, have continued to win critical praise and recognition. Her honors include appointments as MBE and CBE, and in 2016, she became Scots Makar, the Scottish equivalent of the Poet Laureate role. She currently teaches at Newcastle University and serves as Chancellor of the University of Salford.