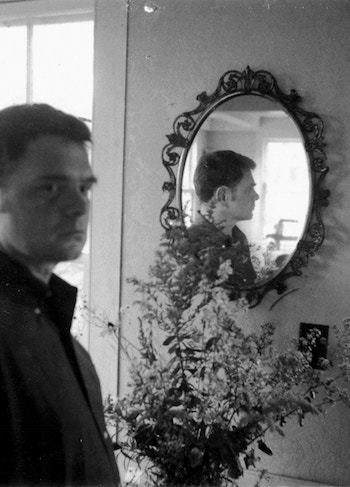 James Marcus Schuyler was born in Chicago, Illinois, the son of reporter Marcus James Schuyler and Margaret Daisy Connor Schuyler. His family moved to Washington, D.C., then to East Aurora in western New York, where he spent his teenage years. From 1941 to 1943, Schuyler attended Bethany College; there, he studied architecture, history, and literature. He was a poor student, spending most of his time playing bridge. Schuyler interrupted his education to join the U.S. Navy and spent a year doing convoy duty on a destroyer in the North Atlantic. However, after an AWOL episode, the military learned of his homosexuality, and he was discharged.

Schuyler moved to New York City in the late 1940s, where he worked for NBC and met the poet W. H. Auden. He soon sold an Arkansas farm he’d inherited, using the proceeds to move to Europe for two years in pursuit of a career as a short story writer. He lived with his then-partner, Bill Aalto, in Italy’s Forio d'Ischia for some of this time, working as Auden’s typist. He also briefly attended the University of Florence. Schuyler moved back to New York after the breakup of his relationship; in 1951, he met poets Frank O’Hara and John Ashbery at a party, then began writing poetry himself. The three men moved into an apartment on 49th Street in Manhattan. With Barbara Guest, Kenneth Koch, and others, this group would make up the poetry-writing contingent of the cross-genre New York School.

From the mid-fifties onward, Schuyler curated circulating exhibitions at the Museum of Modern Art, working as well as an editor and critic for the magazine Art News. These roles, as well as his involvement in art community hubs like the Tibor de Nagy Gallery, brought him friendships with New York City artists such as Willem and Elaine de Kooning, Larry Rivers, Jane Freilicher, and Fairfield Porter. Porter became a major sustainer of the poet, who suffered from occasional mental breakdowns and benefited from the care of friends; from 1961 until 1973, Schuyler lived with Porter’s family on Long Island and at their summer home in Maine.

Although his first novel, Alfred and Guinevere, was published in 1958, with some early poetry appearing in the early-to-mid 1960s, Schuyler’s first major poetry collection, Freely Espousing, was not released until 1969. It garnered him the Frank O’Hara Prize, named in honor of the late poet, who had died a few years prior. More chapbooks and collections followed, including The Crystal Lithium (1972), Hymn to Life (1974), and The Home Book (1977). Schuyler’s poetry soon brought him a small but passionate following, with enthusiasts ranging from Elizabeth Bishop to Eileen Myles, the latter of whom would briefly work as his assistant in the late 1970s. In 1980, he won the Pulitzer Prize for his book-length work The Morning of the Poem, which earned him widespread attention for the first time. Despite this success, Schuyler began increasingly to isolate himself, due to his poor mental and physical health and financial precarity. However, the artistic community around him continued to support him, with various friends and colleagues housing him and securing him institutional funding over the years. Schuyler lived in New York City until his death from a stroke in 1991.

A recipient of the Longview Foundation Award, two National Academy for the Arts grants, an American Academy Award, and an Academy of American Poets Fellowship, Schuyler is beloved by his admirers for his careful attention to and elevation of mundane moments, as well as for his insightful engagement with art and music. Although he never achieved the level of renown of some of his more prolific New York School comrades, his poetry, novels, plays, and collaborations are still read and celebrated today.

Audio/Video: Watch and listen to poem recordings by Schuyler, via PennSound

Text: Read poems by Schuyler at the Poetry Foundation