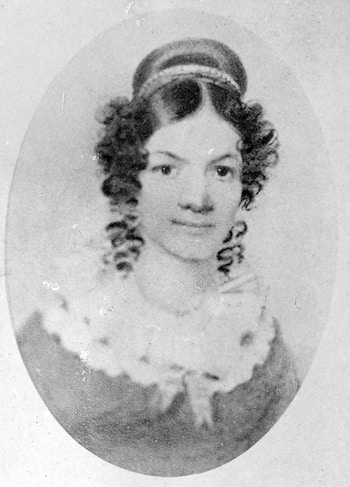 The writer Jane Johnston Schoolcraft (Bamewawagezhikaquay) was born in Sault Ste. Marie, Michigan. Her father was an Irish fur trader and her mother was the daughter of an Ojibwe war chief. Schoolcraft, along with her seven siblings, was educated at home in English literature and history and Ojibwe traditions and lore. She also traveled with her father, including a yearlong trip to Ireland in 1809 to pursue more formal schooling. In 1823, she married U.S. Indian agent Henry Rowe Schoolcraft, whose famed ethnological writings on the Ojibwe were largely made possible by his wife’s indispensable work as language instructor, research assistant, and editor.

Schoolcraft’s own writing—encompassing some 50 poems and many versions of Ojibwe stories and songs—was never in print in her lifetime; however, it is now seen as essential to the historical understanding of Native American literature. Schoolcraft was both the first known Native American female writer and Native American poet, and her work across the previously firm boundaries between English and Ojibwe language, storytelling conventions, and forms was the earliest of its kind.